For Cassini, an Unusual Occultation

The upcoming solar occultation should be quite an event for Saturn-orbiting Cassini. The Sun will pass directly behind the planet from the spacecraft’s vantage point, and will remain there for twelve hours. New ring structures may turn up in the resulting images, along with views of the D, F, G and E rings that will be like none ever observed. In addition, the event should allow scientists to map microscopic particles moving within the ring system.

“We are all sort of on pins and needles waiting for the results,” says Brad Wallis, Cassini Rings Discipline Scientist. “When you get these kinds of high phase angles, very small particles almost focus the light right at the observer. So these faint rings that are so hard to see are going to be considerably brighter and show us details that are just not possible to see in other viewing conditions. All the space between Enceladus and the G ring is probably going to be pretty well lit up. It’s really a unique event.”

By phase angle, Wallis is talking about the angle between the light falling on the rings and the light reflected from them. Ranging from 0° to 180°, phase angles are all about the relationship between light, observer and illuminated object (a 180° phase angle occurs when the object is between the illumination source and the observer). A higher phase angle teases out fine detail that would be lost at a lower angle; in this case, Cassini will be looking almost straight into the Sun, but the Sun will be behind the planet. A similar view of Uranus observed by Voyager 2 in 1986 (see below) was quite useful at showing details of the ring structure there. 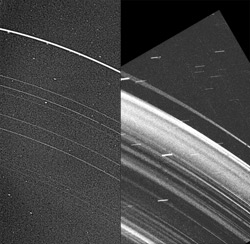 That makes this 12-hour occultation a unique event, but it’s not just about the rings — there’s an Enceladus connection as well. For the unusual Saturnian moon seems to be the source of the E ring, based on the ice jets that Cassini has already discovered on it. Observing how uniform the E ring’s composition is should tell us something about the rate of outflow from Enceladus, and thus illuminate a small part of its history.

Image: NASA’s Voyager 2 looks at Uranus’ rings. The view above, which was taken at much higher phase angle, shows details not visible from any other angle. Credit: Jet Propulsion Laboratory.

Centauri Dreams‘ note: It’s remarkable how fine the cloud of dust that makes up the E ring is. The ring is between 5000 and 10,000 kilometers thick, but made up of such small particles that it poses no danger to the spacecraft. Says Wallis: “We pass through the E ring all the time.” Now we get a chance to see its structure in its entirety. More information is available on this JPL page.