M 87, an elliptical galaxy 50 million light years away in the constellation Virgo, houses a gigantic black hole. The object amounts to 3 billion solar masses and is apparently the source of the huge jet of particles and magnetic waves shown in the image below. That conclusion comes from work proceeding in Namibia as part of the HESS (High Energy Stereoscopic System) collaboration, where scientists have detected sudden changes in M 87’s emission of very high energy (VHE) gamma rays. 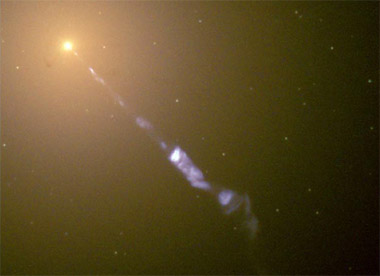 Image: The radio galaxy M 87 seen in visible light. The central region, from which the VHE gamma rays are seen, is located in the upper left part of the image and the relativistic plasma jet extends to the bottom right. Credit: Hubble Space Telescope (HST).

The variability in gamma ray emissions is interesting because it tells us about the size of the region producing the rays. There seem to be numerous ways to accelerate particles in a galaxy like M 87, but now we know that the actual source is an area about the size of our own Solar System. The conclusion seems clear: “This is not much larger than the event horizon of the super-massive black hole in the centre of M 87,” says Matthias Beilicke, a HESS scientist working at the University of Hamburg.

M 87 is a so-called radio galaxy, one that is bright in radio wavelengths and marked by powerful jets of plasma emerging from its nucleus. Exactly how the rays are produced remains enigmatic, but the process seems to be different from what we see in blazars, galaxies that are also sources of VHE gamma rays but whose jets are pointed towards Earth, their gamma rays boosted in energy and intensity by the jet particles.

In M 87, matter accreting around the black hole seems to be creating the plasma jet. The VHE gamma rays thus produced have energies a million million times that of visible light. Their association with the central black hole helps us pin down the options for the production of gamma rays in other radio galaxies.

Centauri Dreams‘ note: Blazars are tricky to study because the outflowing jet obscures astronmers’ view of the VHE gamma ray source. That makes M 87, with its jet pointed not at us but at a slant angle that allows observation, a unique testbed as we witness the violent processes of particle acceleration driven by the supermassive black hole at the galactic core.