Imagine our Sun spewing out a flare 100 million times stronger than usual, releasing the energy of 50 million trillion atomic bombs. The effect on our planet would be catastrophic. Fortunately, what the Swift satellite has spotted occurred a bit further away in a binary system called II Pegasi, some 135 light years from Earth. Swift is designed to detect gamma-ray bursts — the most powerful of all explosions — and this flare was energetic enough to produce a false alarm for such a burst.

NOTE: The original entry here referenced the power of ‘fifty trillion’ atomic bombs; the actual figure used by NASA was corrected, as above, to ‘fifty million trillion.’ Thanks to Robin Goodfellow for catching the typo.

II Pegasi is an interesting system. The flare star is 0.8 times the mass of the Sun; its companion is 0.4 solar masses, and the stars are separated by only a few stellar radii. That produces fast rotation on both stars, and while II Pegasi may be a billion years older than the Sun, the tight orbit has something to do with the flare activity. “The tight binary orbit in II Pegasi acts as a fountain of youth, enabling older stars to spin and flare as strongly as young stars,” said Steve Drake of NASA Goddard, a co-author with Rachel Osten of an upcoming Astrophysical Journal paper. 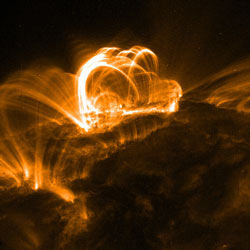 The cosmos is both a life-giving and a life-taking place. Some believe that stellar outbursts like this one may be a factor in conditioning interstellar dust that will later form into planets, immense violence that eventually produces life. But such a flare could be a civilization-ender if it occurred on a star like ours. The x-ray outpouring would produce climate change and, doubtless, mass extinction. X-ray emissions from II Pegasi lasted for several hours; a normal solar flare produces emissions that may last a few minutes.

Image: A typical solar flare from our sun, from September 2005, captured in the X-ray waveband by NASA’s TRACE satellite. Note the bright magnetic loops of matter. The twisting and reconnecting of these loops initiate the flare. NASA’s Swift satellite detected a similar flare from a star system called II Pegasi 135 light-years from Earth… except it was one hundred million times more energetic than the sun’s typical solar flare. Had it been from our sun, it would have triggered a mass extinction on Earth. The II Pegasi flare was too distant (fortunately) to image in detail. Credit: NASA/LMSAL.

Flares aren’t on the agenda, but extinction events of a more localized sort will be discussed at the 2007 Planetary Defense Conference, to be held next March 5-8 at George Washington University in Washington, DC. The objective of the conference is to create a white paper that analyzes the current state of the art in detection and tracking of near Earth objects (NEOs), and the methods we might use to defend ourselves against them. Registration opens in December; let’s hope the conference gets plenty of press coverage.

And finally, a 48-minute documentary with the same name — “Planetary Defense” — is now being produced to depict the various efforts at detection and deflection of asteroids and comets with Earth-crossing orbits. Numerous experts in the field are said to be involved, along with science fiction legend Arthur C. Clarke, who began his 1973 novel Rendezvous with Rama with a major asteroid impact (on a September 11, no less, though one set 75 years in the book’s future). Project Spaceguard is the result, a determined response to incoming objects that, we must hope, will one day become reality in the form of a robust space-based infrastructure throughout our Solar System.