More on growth scenarios for interstellar flight soon. But I don’t want to let the recent dark matter news get past us, so a quick nod to the University of California at Santa Cruz, where researchers have run a powerful computer simulation to probe the dark matter halo that evidently surrounds our Milky Way. It’s a further step toward understanding the stuff that makes up 82 percent of the matter in the universe, and that in turns helps us see how the large scale structure of the cosmos has evolved. 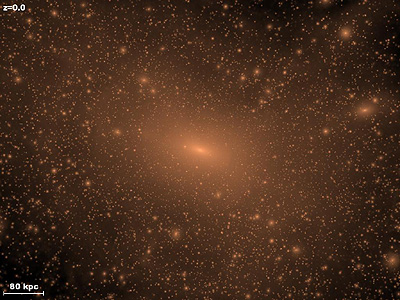 I grew up in a time when it was thought that everything in the cosmos was explicable through gravitational forces produced by objects we could see. From solar systems on up to galaxies, it made sense — and the textbooks did this quite neatly with colorful diagrams — to show how matter found its way into configurations that would turn into celestial objects visible with our telescopes. Now we know the picture was wrong; the situation is far more complex and deeply mysterious.

For if dark matter — whatever it is — so vastly outnumbers matter we can see, then its interactions are crucial for the development of the earliest large-scale structure. Galaxies are inevitably affected by the gravitational wells created by this material, emerging in their distinctive shapes within spherical dark matter haloes. These haloes appear to be much larger than the galaxy they contain, and the new simulations testify as to how clumpy they are, with sub-haloes that themselves exhibit substructure variations. Says Piero Madau (UC-SC):

“We find almost 10,000 subhalos, about one order of magnitude more than in any past simulations, and some of our subhalos exhibit ‘subsubstructure.’ This was expected theoretically, but we have shown it for the first time in a numerical simulation.”

All this despite continuing problems fitting dwarf satellite galaxies — clumpy normal matter — into the dark matter picture. Future gamma-ray detection attempts may provide some answers, though until we have a better read on what dark matter actually is, we’re shooting in the dark.

Centauri Dreams‘ take: The gamma ray connection has continued to bother me — how could missions like GLAST (the Gamma Ray Large Area Space Telescope) have a role to play in detecting dark matter? The best I can do on that is to quote this UC-SC news release:

Astronomers may be able to detect clumps of dark matter within the Milky Way’s halo with future gamma-ray telescopes, but only if the dark matter consists of the types of particles that would give rise to gamma-ray emissions. Certain dark matter candidates–such as the neutralino, a theoretical particle predicted by supersymmetry theory–could annihilate (that is, be mutually destroyed) in collisions, generating new particles and emitting gamma rays.

That’s a big if, of course, but a sound way for investigation to proceed.
The paper is Diemand et al., “Dark matter substructure and gamma-ray annihilation in the Milky Way halo,” accepted for publication in The Astrophysical Journal and available online as a preprint.