Fine-Tuning Our View of Orion

It’s a gorgeous day in the mid-Atlantic states following one of the most colorful autumns in memory. Most of the leaves are down now, which gives me plenty to do. I had intended to look at the new paper from the California & Carnegie planet finder team, but the great outdoors beckons. Instead, we’ll examine their latest next week, along with more on interstellar flight scheduling with reference to Marc Millis’ recent presentation at Princeton and an intriguing Fred Hoyle insight.

For today, here’s a quick post on how adaptive optics can sharpen a telescope’s view. In the image below, you’re seeing two views of the part of the Orion Nebula known as the Trapezium. The Subaru telescope on Mauna Kea (Hawaii), working without adaptive optics, obtained the image on the right back in 1999. The image on the left shows the effect of a new laser guide star system and enhanced AO, and as you can see, the difference in detail is remarkable. Be sure to click to enlarge both views. 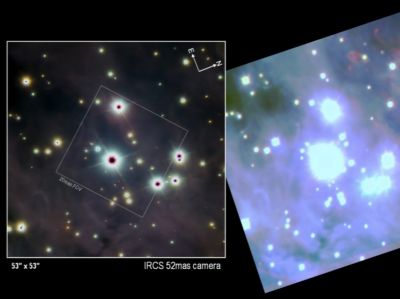 What we’re starting to see from Earth-based observatories would have astonished an earlier generation of astronomers. The new system greatly boosts Subaru’s capabilities over an earlier AO installation. Its laser guide creates an artificial star high in the atmosphere, the light from which can be measured to gauge atmospheric distortion. The adaptive optics system then adjusts the shape of its deformable mirror 1000 times a second to erase the extraneous effects — no more ‘twinkling’ star.

In essence, being able to produce an artificial ‘star’ for measurements anywhere in the atmosphere means that observing teams aren’t limited to regions near existing stars. They can observe any part of the sky they choose, and when they do lock onto a star or distant galaxy, the observatory’s new 188-element wavefront sensor improves Subaru’s view by a factor of ten. One thing’s for sure: if we ever do launch an interstellar probe, installations like these and upcoming space-based systems like Kepler and COROT will sharpen our view of its target.