The evidence for dark matter keeps piling up, even if we still don’t know what it is. Back in the 1930s, Fritz Zwicky noted that the galaxies he was observing weren’t massive enough to account for the way they cohered into clusters. Vera Rubin later took the idea of missing mass further, seeing that stars in the outer parts of galaxies rotated too quickly for the presumed mass of the galaxy. So we’ve known for a long time that something mysterious is out there.

Groups studying the phenomenon focus on odd, hypothetical particles called WIMPS — Weakly Interacting Massive Particles. To make them fit a theoretical model of how dark matter works, scientists assume WIMPS are neutral in charge and about 100 times more massive than a proton. The problem is that they don’t interact with most matter. If they’re to be found, they’ll have to be detected in a rare collision within extremely sensitive detectors. 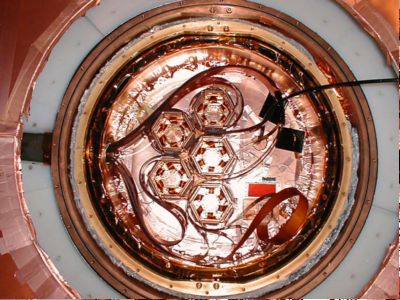 Image: The CDMS II detectors (hexagons) are stacked in an icebox with six insulating layers to keep the instruments cold. Wires carry measurements from the detectors to computers outside. Credit: CDMS Collaboration.

Cool crystals of silicon and germanium down to just above absolute zero, as is being done by the Cryogenic Dark Matter Search II in Minnesota’s Soudan mineshaft, and you have the potential for tracking the heat of a collision. No results yet, but maybe that’s to be expected. Dark matter particles seem to have mass and to obey the laws of gravity, but as their name says, they interact only weakly with most matter. And because they’re neutral, they don’t form atoms. “Dark matter permeates everything,” says Stanford physicist Blas Cabrera. “It just never collapsed the way atoms did.”

Here’s a good backgrounder on the Soudan work. I like this further quote from Cabrera:

“It’s harder and harder to get away from the fact that there is a substance out there that’s making up most of the universe that we can’t see. The stars and galaxies themselves are like Christmas tree lights on this huge ship that’s dark and neither absorbs nor emits light.”

45 scientists at 13 institutions are working with Cabrera to get a better profile of that ship, hoping to build a one-ton detector to improve their chances at snaring the elusive WIMPS. Be aware, too, of other ongoing dark matter work through the ZEPLIN experiment, which is using xenon detectors in a mine near Sheffield, England, and the IceCube project in Antarctica. That one, which we’ve looked at previously, uses optical sensors that may be able to track WIMP annihilations.

The scope of what we don’t know is phenomenal. Dark matter calls into question our understanding of mass, and demands that we explain how the visible objects in the universe achieve the configurations they do. Add together the presumed amount of dark matter and the even more mysterious dark energy that fills the universe and you’ve accounted for all but four percent of what’s out there. To be sure, there’s plenty of mystery even within that four percent, but the notion that 96 percent of the universe is in some sense ‘dark’ is the greatest counterweight to intellectual pride that this writer can imagine.

Previous post: Hawking: The Need for an Interstellar Mission