An Exotic Find in the Interstellar Medium

It’s always good to see Green Bank in the news. The West Virginia facility was the site of Frank Drake’s pioneering SETI attempt called Project Ozma back in 1960. Now Green Bank’s newest dish has been used to discover the first negatively charged molecule in space, a useful building block in our understanding of how interstellar matter turns into planets that can eventually produce life. 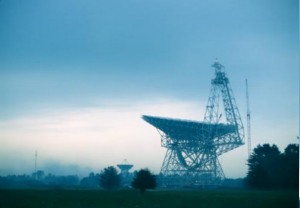 The molecule in question is called C6H-, described as a chain of six carbon atoms with one hydrogen atom at the end and an extra electron. That makes it a molecular ‘anion’ — a molecule with a negative charge because of the extra electron — and it’s a bit of an anomaly. You would think that ultraviolet light would dislodge that spare electron, but this molecule survives. In fact, it’s larger than most neutral and all positive molecules known in space.

Image: The Green Bank Telescope at dusk. Courtesy of NRAO/AUI.

Astronomer Michael McCarthy (Harvard-Smithsonian Center for Astrophysics) calls it ‘a rare and exotic species, like the white tiger of space,’ one whose sheer size may be the cause of its unusual stability. Whatever the case, laboratory experiments and the good services of Green Bank tracked it down in a shell of gas surrounding a red giant star called IRC +10216 in the constellation Leo, as well as in the cold TMC-1 cloud in Taurus. The implication of the dual finds is that the processes that created C6H- are ubiquitous.

As to the Green Bank Telescope itself, what a glorious thing. It’s the world’s largest fully steerable radio telescope, taller than the Statue of Liberty and boasting a surface of almost two acres. The West Virginia site is spectacular and mountainous, but the telescope’s design allows it to view the entire sky above five degrees elevation, pushing 16 million pounds along its track. We should learn a good deal more about the interstellar medium through this instrument. The current work is McCarthy et al., “Laboratory and Astronomical Identification of the Negative Molecular Ion C6H-,” Astrophysical Journal Letters 652 (2006), pp. L141-L144 (available here).