Life Throughout the Galaxy?

Is there a galactic habitable zone, a region within the Milky Way where conditions for life are optimum? If so, we want to know its parameters, as they would help us define the search area for living worlds. The concept has kicked around for a while, and now surfaces again in an interesting paper by Nikos Prantzos (Institut d’Astrophysique de Paris). Prantzos ponders the main variables and, while concluding that the galactic habitable zone is far from well understood, believes it conceivable that the entire galactic disk may, at this stage of its evolution, be suitable for life.

That conclusion goes further than Charles Lineweaver and team’s work in 2004, the latter having found that the zone for complex life exists in a ring a few kiloparsecs wide surrounding the galactic center and gradually spreading outward as the Galaxy evolves (our earlier story on that work and habitable zones in general is here). Like Lineweaver, Prantzos looks at planet formation in terms of stellar metallicity (the amount of elements heavier than hydrogen and helium in the body of the star), using later data based on simulations of planet formation. 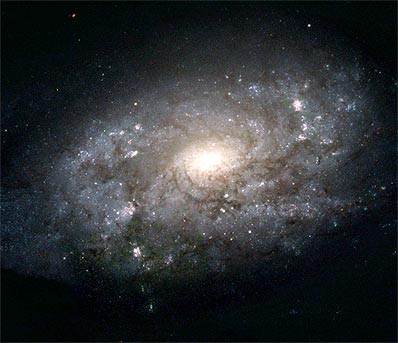 Image: An artist’s conception of the Milky Way. Can the entire galactic disk now be considered a viable habitable zone? Credit: NASA, ESA and The Hubble Heritage Team (AURA/STScI).

So what do we really know about metallicity? Stars hosting planets show high metallicity compared to stars that have no planets, a trend that points to metallicity as a major factor in gas giant formation. But note: the effect of metallicity on Earth-like worlds is unknown, and some theories even suggest that low metallicity may stimulate terrestrial planet formation. If that work (still unpublished) bears out, then Earth-like planets may be common in low metallicity environments like the outer edges of the galaxy.

Another key factor is the risk of life being exterminated by nearby supernovae events. A hostile cosmic environment, in other words, could sharply limit the number of life-bearing worlds. But Prantzos argues that the supernova threat is hard to characterize. If all land animals on a planet die because of nearby supernova radiation, marine life will most likely survive. Here the author comments on the survivability question:

In the case of the Earth, it took just a few hundred million years for marine life to spread on the land and evolve to dinosaurs and ultimately, to humans; this is less than 4% of the lifetime of a G-type star. Even if land life on a planet is destroyed from a nearby SN explosion, it may well reappear again after a few 108 years or so. Life displays unexpected robustness and a cosmic catastrophe might even accelerate evolution towards life forms that are presently unknown. Only an extremely high frequency of such catastrophic events (say, more than one every few 107 yr) could, perhaps, ensure permanent disappearance of complex life from the surface of a planet.

Then factor in galactic evolution, which suggests that the rate of supernovae, although always higher in the inner disk, declines over time, and survivability in the inner disk regions goes up as the galaxy ages. The ‘ring’ of survivability is narrow early on but progressively migrates outwards, extending perhaps to the outer rim of the galaxy today. There follows this interesting consequence:

Thus, despite the high risk from SN early on in the inner disk, that place becomes later relatively ‘hospitable.’ Because of the large density of stars in the inner disk, it is more interesting to seek complex life there than in the outer disk; the solar neighborhood (at 8 kpc from the center) is not privileged in that respect.

Prantzos is no dogmatist. A clear-eyed theorist, he takes pains to note that these findings depend heavily on our assumptions about metallicity and planet formation (and the question of migrating ‘hot Jupiters’ weighs in significantly as well). But if most of the galaxy really is suitable for life, then the concept of a galactic habitable zone loses punch. We may find that our search for extraterrestrial life can roam broadly through the cosmos.

The paper is Prantzos, Nikos, “On the ‘Galactic Habitable Zone,'” slated for publication in Space Science Reviews and available as a preprint online. The Lineweaver paper is “The Galactic Habitable Zone and the Age Distribution of Complex Life in the Milky Way,” Science Vol. 303, No. 5654 (2 January 2004), pp. 59-62, with abstract here.