Tightening the Focus on Dark Matter

Interesting things happen when gravitational lenses go to work. The earliest observations of the phenomenon involved entire clusters of galaxies. When the alignment is right, a galaxy cluster between the observer and a still more distant galaxy will bend the light of that galaxy. It will appear as one or more luminous arcs which are actually made up of its multiple images distorted (and magnified) by the gravitational lens. 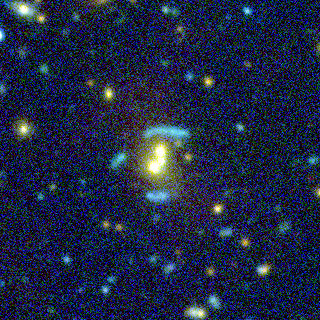 All this happens because, as Einstein told us, spacetime is curved by the presence of matter. Here’s how gravitational lensing looks. Notice the blue arcs of the lensed galaxy in the background surrounding the galaxies at their center, which have distorted spacetime enough to make this image possible.

The latest work on the lensing phenomenon focuses on smaller structures like groups — rather than entire clusters — of galaxies. Astronomers using the Canada-France-Hawaii Telescope (Hawaii) are devoting 500 nights of telescope time to a survey of an area of the sky comparable to four full moons. The effort will be stretched over a five year period.

Image: This example of a galaxy group lens in the CFHTLS-SL2S, called SL2SJ021408-053532, shows a very complex arc structure (in blue). Such complex arc geometries allow us to probe the details of the dark matter profiles associated with the group of yellow galaxies in the center of the image. Credit: Canada-France-Hawaii Telescope Corporation 2006.

Lensing arcs around various groups of galaxies have begun showing up in the survey. They’re more than just intriguing visual objects. In fact, they provide an opportunity to study the distribution of dark matter in the galaxy groups in question, telling us much about mass we can see and mass that remains dark but provides its signature through the operation of curved spacetime. We’ve only been looking at gravitational lensing for twenty years now, but it’s clear these unusual displays are becoming prime tools for understanding the large scale structure of the cosmos.