Most stars in the universe were evidently formed in stellar nurseries like the Tarantula Nebula, shown in the spectacular image below. I’ve been wanting to shoehorn this item into our pages for a couple of weeks now but always wound up having it preempted by other news. Nonetheless, this look at the complex known as 30 Doradus is well worth pondering as we move into a new year of interstellar studies. It’s based on data collected through four filters using the Wide Field Imager on the European Southern Observatory’s 2.2-m instrument at La Silla (Chile). 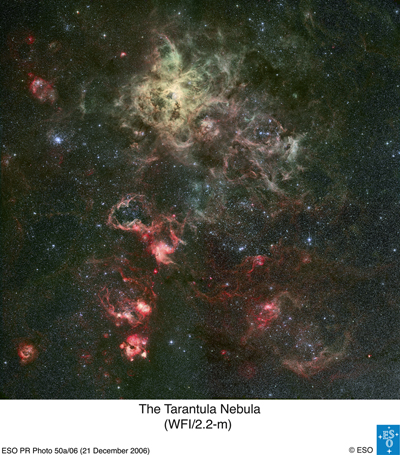 Image (click to enlarge): One square degree image of the Tarantula Nebula and its surroundings. The spidery nebula is seen in the upper-centre of the image. Slightly to the lower-right, a web of filaments harbours the famous supernova SN 1987A. Many other reddish nebulae are visible in the image, as well as a cluster of young stars on the left, known as NGC 2100. Credit: Observations carried out by João Alves (Calar Alto, Spain), Benoit Vandame and Yuri Bialetski (ESO) with the Wide Field Imager (WFI) at the 2.2-m telescope on La Silla. The colour composite was made by Bob Fosbury (ST-EcF).

A part of the Large Magellanic Cloud, the Tarantula Nebula is located about 170,000 light years from Earth in the southern constellation Dorado, and is home to some of the most massive stars known. It’s what is known as an emission nebula, a cloud of ionized gas being heated by hot young stars and thereby emitting light. At almost 1000 light years across, the nebula covers an area almost the size of the full Moon as seen from Earth. So vast is the Tarantula that if it were in the Milky Way at the distance of the Orion Nebula, it would cover one-quarter of the sky.

Previous post: A SETI Book for the New Year