‘Titan’s Lakes Revealed’ says the stunning cover of the current issue of Nature. The news isn’t really a surprise — remember that as Huygens approached Titan, there was still some question about whether or not the probe might not splash down in a sea of liquid methane. But here is the hard evidence, culled from the July 22 Titan flyby. The dark patches Cassini ‘saw’ on radar show little radar reflectivity and, when you add in topographical features, bear the clear signature of lakes.

For me, the news evokes a long-ago time when I was growing up in St. Louis. Among my father’s books was an old, leather-bound atlas that dated back to the late 19th Century. And one day as I browsed through various maps, I saw the thrilling word ‘unexplored’ in one corner of the Mato Grosso region of western Brazil. Filling in a map and tracing the great saga of exploration is one of humanity’s great themes, one we now extend to entire worlds. That ‘Titan’s Lakes’ headline took me right back to a boyhood fascination I’ve never lost with the building of maps and the challenge of long odds against the unknown.

These lakes are, of course, like nothing along the Amazon. The ambient temperature being some 180 below zero Celsius, they’re most likely methane combined with ethane, and scientists are speculating that they’re the probable source of the hydrocarbon smog we’ve observed in Titan’s atmosphere. The biggest lake is over sixty miles long; the smallest is less than half a mile wide, and there are dozens to choose from. 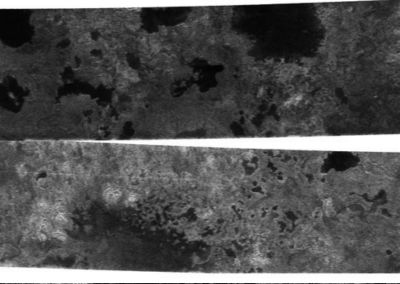 I like Larry Soderblom’s musical analogy: “Titan has turned out to be like a musical crescendo — each pass is more exciting than the last.” How true. Soderblom (USGS, Flagstaff) goes on to comment on these features:

“What we see is darker than anything we’ve ever seen elsewhere on Titan. It was almost as though someone laid a bull’s-eye around the whole north pole of Titan, and Cassini sees these regions of lakes just like those we see on Earth.”

That’s an exciting find indeed, and one fleshed out by Cassini’s view of channels leading into and out of some of these dark lake areas. Their shape is consistent with being carved out by liquid. The completely dark areas are those thought to contain the liquid mix, and some show rims around them that imply deposits formed from evaporation. All this makes the next Cassini pass, scheduled for September, of more than passing interest. The October flyby to follow will take an even closer look at Titan’s north pole region as the drive to map the world’s lakes picks up momentum.

All this is convincing evidence of Titan’s ongoing hydrological cycle, one involving methane rains and subsurface methane layers that Cassini scientist Jonathan Lunine calls ‘methanofers,’ the methane equivalent of aquifers. The theory is that as Titan moves through its seasons, lakes in the winter hemisphere expand through methane rain, while southern hemisphere lakes dry up. You can find more in this JPL news release.

Addendum: Chris Rowan does a terrific job presenting this story on Highly Allochthonous.