A Close Eye on Fomalhaut

It took six years to develop the design for the ‘microshutters’ that will fly aboard the James Webb Space Telescope. They will work with its near infrared spectrograph to screen out light from foreground objects. The advantages are enormous: The Webb telescope will be able to adjust its light mask with exquisite precision, something that previous technologies could not achieve to anywhere near this level of performance.

We’re talking thousands of tiny shutters — 62,000 to be exact — each measuring 100 by 200 microns, arranged in four identical grids. They’ll function in front of an eight million-pixel detector, allowing only the light from the specific areas under observation to reach the instrument.

Moreover, the new technology greatly widens the efficiency of the instrument in terms of observational time. Says Harvey Moseley (principal investigator for the microshutter at GSFC): “The microshutters provide a conduit for faint light to reach the telescope detectors with very little loss. The shutters allow us to perform spectroscopy on up to 100 targets simultaneously. We will be able to see deeper in less time.”

All this while functioning at a cool 40 Kelvin (-388 degrees Fahrenheit, or -233 degrees Celsius), the operational temperature for the Webb spectrograph. A nice NASA feature on how all this works is here. Webb doesn’t launch until 2013 at the earliest, and in addition to its deeper view into the early universe, it should have powerful capabilities at penetrating dust and debris to find planetary systems in formation.

The comparison between the Webb instrument and the Spitzer Space Telescope is striking. Consider this: Spitzer’s aperture diameter is roughly three feet. The Webb’s aperture will be closer to 20. More on its design in this interview MSNBC’s Alan Boyle conducted with John Mather (senior project scientist for the JWST). Having discussed ways of determining the chemical composition of the atmosphere of planets around other stars, Mather goes on to consider one system that merits special attention:

We also are pretty sure there’s a planet that could be detected directly, around a star called Fomalhaut. It’s got a big cloud of dust around it which is organized in a ring. This ring is probably due to the gravitational force of a planet that’s also orbiting that same star. So we think we know more or less where to look for that planet, and that it should be big enough to see directly. But it’s more like Jupiter than like Earth. So we’ll be getting some clues about the possibilities for life elsewhere from all of this. 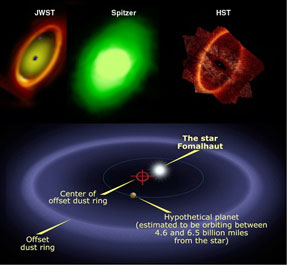 When you’re flying an instrument that can probe to the earliest era of the universe, working on exoplanets seems like staying close to home. But notwithstanding the science we’ll pull from the Webb telescope about the beginnings of the cosmos, the instrument’s effectiveness in studying planetary disks could help us with many puzzles, including hot issues like planetary migrations as gas giants move toward their parent star, and the effect of their passage on planets in the inner system. But with launch six years away, we’re bound to accumulate still more mysteries for the JWST to investigate around interesting places like Fomalhaut.

Image: JWST, Spitzer and HST views of the area around the star Fomalhaut, with diagram showing a suspected planet. Credit: NASA, GSFC.