In Search of Dark Matter Galaxies

Understanding dark matter, a major goal for cosmology, comes down to figuring out how normal matter interacts with its mysterious counterpart. A vital part of this work may be the objects called dwarf spheroidal galaxies, surely among the most bizarre agglomerations every observed. For current thinking (based on mass-to-light ratios) is that a dwarf spheroidal may be a galaxy composed almost entirely of dark matter.

And if that’s hard to imagine, consider the problem of researchers trying to observe such objects. A dwarf spheroidal is all but devoid of gas and contains few stars, its normal (baryonic) matter having been stripped away by interactions with larger galaxies. In fact, these ghostly galaxies seem to need larger galaxies in their proximity to form, according to new work by Stelios Kazantzidis (Stanford Linear Accelerator Center), Lucio Mayer (Swiss Federal Institute of Technology) and collaborators. 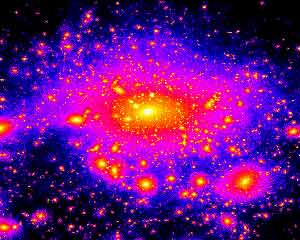 Working with supercomputer simulations, the Kazantzidis team constructed a model for dark galaxy formation, one that begins as a relatively normal galaxy approaches the Milky Way some 10 billion years ago. In a complex sequence of events, gas within the smaller galaxy heats up as it experiences gravitational forces from the larger system. The consequence: gas and luminous stars are gradually stripped away, leaving behind the dark matter ‘shadow’ galaxy.

Image (click to enlarge): This supercomputer simulation shows as bright clumps the dark matter satellites that can be found around our Milky Way galaxy. The central region corresponds to that containing the luminous matter (gas and stars) of the Milky Way. Credit: Stelios Kazantzidis.

Which may explain why we see fewer satellite galaxies around the Milky Way than theory would predict — the ‘missing’ galaxies may be there but dominated by dark matter. “These galaxies could just be too dark to detect,” said Kazantzidis. “But their possible existence will substantially alleviate the missing satellites problem with profound implications for the predictive power of the [Lambda Cold Dark Matter] theory.”

That would be a satisfying outcome indeed, for the Lambda Cold Dark Matter theory is the attempt to fit dark matter into the broad cosmological framework, and working out a consistent place for the mysterious dark stuff that peppers the universe would unlock many doors. On that score, be aware that the Sloan Digital Sky Survey has revealed a number of extremely faint satellite galaxies near the Milky Way within recent months. Will these be the key to confirming Kazantzidis’ theories?