The night sky has always been a kind of time machine, allowing us to look farther into the past the deeper we look into space. But the heavens are also a time machine in another sense — by looking carefully, we can find stellar systems in almost every stage of development. We recently saw an example in the Helix Nebula, an object that suggests what our Solar System may look like in five billion years, after the Sun has gone into its red giant phase and then collapsed into a white dwarf.

Now have a look at the Sun as it may have been five billion years in the other direction, back when it was coalescing out of its own primordial materials. The Pillars of Creation image taken by Hubble has become iconic, a majestic, breathtaking vista of a star-forming region in M16, the Eagle Nebula. Below, we see a Hubble image of the Pillars overlaid with Chandra X-ray Observatory data showing infant stars being born.

Note the bright x-ray sources, most of which are young stars. Much harder to see in the image is E42 (see the caption below for its location). It is an evaporating gas globule (EGG), one of 73 found in the Pillars of Creation region. Only four seem massive enough to form a star, and of these only E42 seems to have the mass of the Sun. All four of these proto-stars are thought to be the youngest ever identified by astronomers, according to Jeffrey Linsky (JILA, Boulder). And all are apparently too young to be emitting x-rays. 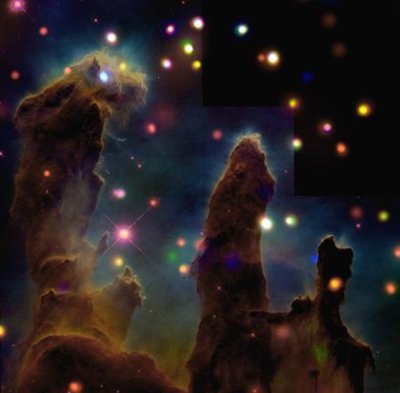 Image: The Chandra data show bright X-ray sources in this field, most of which are young stars. In this image, red, green, and blue represent low, medium, and high energy X-rays. The Chandra data have been overlaid on the Hubble Space Telescope image to show the context of these X-ray data. E42 is located in the left pillar on the right edge of a node jutting out to the right about two-thirds of the way down the pillar. Credit: X-ray: NASA/CXC/U.Colorado/Linsky et al.; Optical: NASA/ESA/STScI/ASU/J.Hester & P.Scowen.

The question to be asked now is whether E42 will ever grow up. 7000 light years away, the Pillars show evidence of a nearby supernova explosion, according to a French study. Says Linsky, “My guess is that the shock wave from the supernova may have been far enough away so that E42 and some of the other stars may have survived. But I guess we will have to wait another thousand years or so to get the answer.”

A supernova is likely the cause of the heavy elements in the gas that formed our Sun and Solar System. That would indicate that the Sun was born under conditions not so different from what we see in the Pillars of Creation, an environment rocked by shockwaves and permeated by ultraviolet radiation. Chemical abundances tell the tale and help us interpret the signs of an otherwise unrecoverable past.