Dark Energy at the South Pole

If dark energy is pushing the universe apart at an accelerating clip, when did its effects begin to be felt? One way to study that question is through the Cosmic Microwave Background, whose infinitesimal variations in density and temperature give us an idea of what was happening a scant 400,000 years after the Big Bang. We should be able to find information in the CMB about how dark energy affected the formation of galaxy clusters by comparing CMB evidence against what we see in these clusters today. 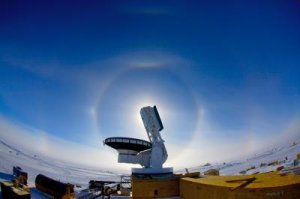 And that makes ‘first light’ at the National Science Foundation’s South Pole Telescope a noteworthy event. The 75-ft tall telescope has been under assembly and testing since November, and its February 16 test run was a success. Now the pole’s cold, dry air will allow long-term Earth-based study of the CMB with little interference from water vapor. The Sunyaev-Zeldovich effect, which distorts CMB radiation as it encounters the gases in intervening galaxy clusters, will help scientists image the gases in these clusters.

The potential data windfall from galaxy clusters is immense with this instrument. Says John Carlstrom (University of Chicago), who headed the team that tested the telescope:

“To get a meaningful constraint on dark energy through measuring galaxy clusters, you need something like this South Pole Telescope. The cluster SZ [Sunyaev-Zeldovich] signals cover small patches in the sky relative to the intrinsic variations in the cosmic microwave background. To get the necessary resolution, you need a big telescope. Now we have one.”

At an altitude of 3000 meters on the Antarctic ice sheet, the Amundsen-Scott South Pole Station must be the nearest thing to a space-based telescope on Earth. The first major project for the instrument is a survey that is expected to reveal thousands of galaxy clusters, helping us to refine our knowledge of dark energy’s effects over time. More information is available at the South Pole Telescope homepage.