Solar Sail Mission to an Asteroid

If you’re looking to shake out a solar sail design, a near-Earth asteroid (NEA) makes a tempting target. It’s relatively close and offers the opportunity of a landing and sample return. That helps us work out the age, evolution and other characteristics of a class of objects that are potentially dangerous to our planet. It’s no surprise, then, that when DLR, the German Aerospace Center, went into serious solar sail studies, it began to develop a dedicated mission via sail to one or more NEAs.

That was in August of 2000, and it built on DLR’s successful ground deployment of a square solar sail 20 meters to the side the previous December, conducted in a simulated weightless environment (see below). The DLR design is a square sail with four triangular sail segments, a valuable proof of concept in a time when little budgetary emphasis is being placed on sail designs by any of the major space agencies. 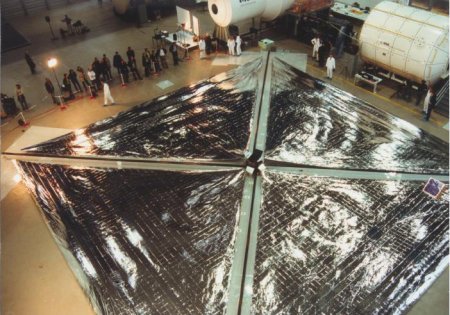 For the asteroid mission, DLR now ponders a larger sail. Bernd Dachwald and colleagues, writing from DLR’s Institute of Space Simulation, provide an overview of such a sail in a recent paper, saying “…we consider a (70 m)² solar sail with a speciﬁc weight of about 20 g/m² to be a realistic, however still ambitious, near-term development goal.” Using such a craft, the authors believe it possible to return a sample from the NEA 1996FG3 within ten years of launch. The spacecraft would hold a payload of 300 kg including lander and return capsule (but excluding the sail assembly).

This mission, tagged ENEAS by its designers, focuses on 1996FG3 because of its scientific interest as well as its relatively accessible orbit. This NEA is a binary, with the primary body 1.4 kilometers in diameter and the secondary about a third of that. Getting to it involves, for the sake of time, a direct insertion into an interplanetary trajectory, after which the sail is deployed and oriented to follow the mission profile. At the NEA, the craft will hover in the hemisphere opposite the Sun, studying its gravitational field and deploying the lander and integrated return capsule.

A number of mission profiles are possible with this technology depending on the size of the sail and payload, with multiple NEA rendezvous and sample return missions analyzed in the paper. The authors also weigh against the sail design the possibility of using NASA’s NSTAR ion thrusters, noting that the ion option is faster but leads to larger launch costs. If the cost of longer ground operations is lower than the savings in launch cost, and if “…the mission duration plays a subordinate role with respect to cost,” the solar sail might prove to be the better option.

But here’s a key point, noted by the authors in their conclusion. No matter what the cost relationship turns out to be, “…on the way to more advanced solar sailcraft, as they are required for high-ΔV missions, the development of solar sails with moderate performance is an indispensable ﬁrst stepping stone.” Because we need to gain experience with this technology just as we’re building the needed data on ion thrusters through missions like DAWN and SMART-1. So the solar sail asteroid rendezvous comes with powerful incentives.