OK, we sometimes encounter scientific terms with large numbers of syllables, but how about this one, perhaps the prize winner: the Yarkovsky-O’Keefe-Radzievskii-Paddack Effect. This multicultural monicker — drawn on the names of a Russian engineer, an American scientist, a Russian astronomer and a NASA aerospace engineer — has something interesting to say about sunlight. As solar radiation heats and cools an asteroid, released energy can change its rotation. In the case of the asteroid 2000 PH5, the effect increases the spin rate to the point where the asteroid may eventually come to spin faster than any asteroid known.

This complicated study used a variety of telescopes to make the case that the asteroid’s rotation period decreases by 1 millisecond every year. That’s a long and slow effect, but the results build over time, and they’re more readily observable because 2000 PH5 approaches Earth every year. The cause is the heating of the asteroid’s surface by the Sun. Stephen Lowry (Queens University Belfast) puts it this way:

“The warming caused by sunlight hitting the surfaces of asteroids and meteoroids leads to a gentle recoil effect as the heat is released. By analogy, if one were to shine light on a propeller over a long enough period, it would start spinning.” 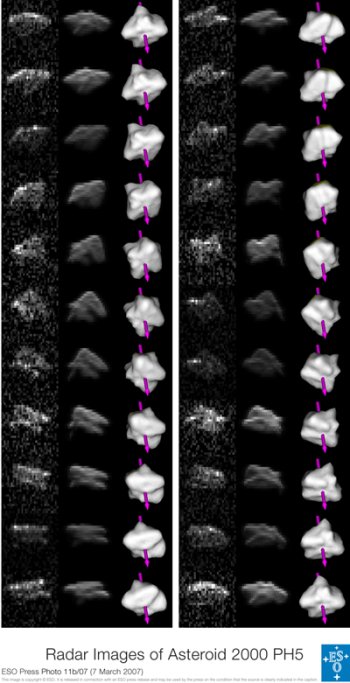 Is this how some binary asteroids have formed, spinning so fast that they eventually break apart? Nobody has ever observed the YORP effect in action before, but it’s thought to play a role in changing asteroid orbits between Mars and Jupiter, perhaps leading some into planet-crossing orbits. With observations from a bevy of telescopes around the world and radar observations from Arecibo and the Goldstone facility in California, the researchers were able to create a 3D model of the asteroid’s shape.

The spin effect thus noted was seen to increase according to theory throughout a four year observing period. Projecting forward with these data, the team sees 2000 PH5 stable for another 35 million years, with its existing 12 minute rotation being reduced to just 20 seconds in that time. No currently known asteroid is rotating so fast. Says Lowry: “This exceptionally fast spin-rate could force the asteroid to reshape itself or even split apart, leading to the birth of a new double system.”

Image: Radar images obtained at the Arecibo facility in Puerto Rico on July 28, 2004, covering one full rotation of asteroid 2000 PH5 (columns 1 and 4). Corresponding shape-model fits to the images are shown in columns 2 and 5. Columns 3 and 6 are detailed 3-D renderings of the shape model itself. Credit: European Southern Observatory.

Another asteroid under study is 1862 Apollo, observed by a different team that finds the asteroid is making one extra rotation per orbit around the Sun every forty years. That’s a gain of more than four minutes a year, making it clear these effects can play a serious role in the way such objects move. No orbital changes from this source will be quick, but over the long haul YORP may help us make better predictions about what near-Earth asteroids are going to do as they make their close approach.

One of two papers slated to appear in Science Express is Lowry, “Direct Detection of the Asteroidal YORP Effect,” which should be online soon. The paper on 1862 Apollo is Kaasalainen et al., “Acceleration of the rotation of asteroid 1862 Apollo by radiation torques,” posted online in advance of print publication by Nature and available here.

Next post: AEGIS: A Deep View of Galactic History