Another Small Step Toward Fusion?

We’re a long way from achieving practical fusion to supply our power needs, much less fusion rockets to the stars. Just how far can be gauged by a look at current research. The principle seems straightforward: Heat hot, ionized gas to the point of ignition and you can fuse hydrogen into helium. But can you contain the plasma while you’re heating it? More to the point, can you get more power out of your device than you put in?

Most of the effort these days is going into tokamak designs that use magnetic fields to contain the plasma. But tokamaks tap plasma currents to produce at least part of the needed field. And, says John Canik (University of Wisconsin), “The problem is you need very large plasma currents and it’s not clear whether we’ll be able to drive that large of a current in a reactor-sized machine, or control it. It may blow itself apart.”

Enter the stellarator, an alternative plasma confinement method that uses no plasma currents, but one that loses energy at a high rate because the magnetic coils that generate the field are inefficient. That energy loss is known as transport, and too much of it makes fusion impossible. It would be helpful to correct that, for the stellarator brings engineering advantages in terms of designing a working fusion reactor. 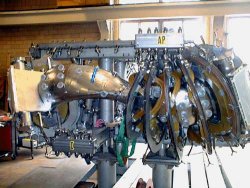 Canik’s team at Wisconsin is working on a possible solution, a stellarator concept called HSX (Helically Symmetric eXperiment). It loses less energy than other stellarator designs, bringing some of the confinement advantages of a tokamak to the stellarator concept. The robustness of the magnetic field thus produced retains the energy and may make practical fusion more likely. “The slower energy comes out, the less power you have to put in, and the more economical the reactor is,” says Canik.

Image: Ungainly, isn’t it? But if it can help us toward workable fusion, we’ll live with its looks. Here we see the HSX coils and vessel on a support superstructure. Credit: University of Wisconsin.

Useful indeed, but consider this an incremental rather than breakthrough advance. The University of Wisconsin’s fusion research program has been going since the early 1960s and now includes several plasma confinement experiments. HSX’s design goes back seventeen years, a reminder that in so much of our scientific endeavor, patience is the name of the game.

Nonetheless, the latest work tweaks the confinment field interestingly, as described in this news release:

The HSX is the first stellarator to use a quasi-symmetric magnetic field. The reactor itself looks futuristic: Twisted magnetic coils wrap around the warped doughnut-shaped chamber, with instruments and sensors protruding at odd angles. But the semi-helical coils that give the HSX its unique shape also direct the strength of the magnetic field, confining the plasma in a way that helps it retain energy.

Next up is manipulating the coil design to achieve the lowest transport rate, and then figuring out ways to make the coils easier to engineer. Is a fusion generator on the (distant) horizon? The paper is Canik et al., “Experimental Demonstration of Improved Neoclassical Transport with Quasihelical Symmetry,” Physical Review Letters 98, 085002 (2007).