Bringing computer networking to space exploration is a major step forward. It allows us to go beyond the old model of pointing radio dishes at a specific spacecraft and downloading information — a time-consuming process as we move from one spacecraft to another — to communicate instead with a single hub vehicle that could be processing data from a cluster of sources. That maximizes precious communications resources here on Earth and allows us to connect planetary rovers, for example, with base stations, orbiting spacecraft and other nearby vehicles.

We’ve talked about interplanetary networking before in terms of the InterPlanetary Internet Project (IPN), a key player in which is Internet legend Vinton Cerf. But extend the idea further, as John Barker (University of Glasgow) is doing today at the Royal Astronomical Society’s national meeting in Lancashire (UK). What Barker has in mind is using ‘smart dust’ — tiny computer chips surrounded by a polymer sheath — to form intelligent swarms for research on a planetary surface.

Here’s how Barker explains the idea:

“We envisage that most of the particles can only talk to their nearest neighbours but a few can communicate at much longer distances. In our simulations we’ve shown that a swarm of 50 smart dust particles can organise themselves into a star formation, even in turbulent wind. The ability to fly in formation means that the smart dust could form a phased array. It would then be possible to process information between the distributed computer chips and collectively beam a signal back to an orbiting spacecraft.” 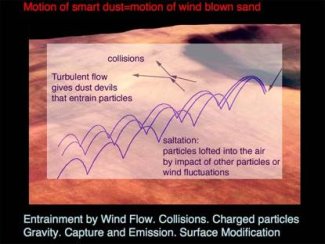 How to control the motion of smart dust in such an environment? The surface of the polymer sheath surrounding the chip can be smoothed or wrinkled depending on the application of a small voltage. Switching between rough and smooth modes adjusts the drag on the particle, allowing it to rise or settle toward the surface. Controlling these modes allows the particles to move toward their target despite ambient weather conditions.

Image: The University of Glasgow team has studied the collective movement of motes towards a target located in a portion of the Martian surface that extends over a range of several kilometers. A smart dust mote has approximately the density and volume of a coarse grain of sand. It follows that the uncontrolled motion of smart dust is determined by the same Aeolian processes of saltation, settling and surface creep that govern the movement of sand in desert regions. Adjusting the surface of smart dust particles provides one way to control their motion. Credit: John Barker/University of Glasgow.

Barker notes a key problem with current technology. Today’s chemical sensors are too large for particles the size of sand-grains that might be carried by the Martian wind for deployment. But the denser atmosphere of Venus could carry particles up to a few centimeters in size. In any case, as we move forward not many years, our chip components should reach sizes of a few nanometers across, making them, in Barker’s thinking, more like molecules diffusing through an atmosphere than dust grains.

Nanotechnology will have an extraordinary effect on space exploration, offering in a few short years options that would otherwise have been impossible. The team at Glasgow knows that and is clearly unafraid to think big. Acknowledging that smart dust is years away from deployment on an actual mission, Barker looks well down the road at interstellar implications: “Our first close-up studies of extra-solar planets could come from a smart dust swarm delivered to another solar system by ion-drive.”