Death of an Astrophysicist 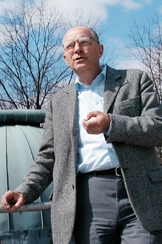 Bohdan Paczynski, the Princeton astrophysicist who died April 19, was a major contributor to the exoplanet hunt, fine-tuning the techniques used in gravitational microlensing. Coming to Princeton in 1982 after twenty years at Warsaw’s Copernicus Astronomical Center, Paczynski understood early on that the bending of light by foreground objects, predicted by Einstein, could be applied to surveying stars in our own galaxy. A star passing directly in front of another can focus the light from the background star, producing a natural lens that allows investigation of objects otherwise impossible to observe.

The consortium of scientists that Paczynski led would go on to found the Optical Gravitational Lensing Experiment (OGLE), now active at Chile’s Las Campanas Observatory. Says Michael Strauss, a professor of astrophysical sciences and a colleague of Paczynski’s:

“The next thing Bohdan realized was that when you observe lensing that often, you can do other clever things, such as use it to look for planets around faraway stars. If there’s a planet orbiting the foreground star, the planet will subtly change the lensing signature, which can be used to infer the existence of the planet.”

And that’s just what OGLE did last year in discovering one of the smallest planets yet found, a rocky world orbiting a star some 20,000 light years away. Gravitational lensing provides a unique window into the distant stellar system and helps us expand our exoplanetary census as we look toward galactic center. With solid contributions in dark energy and gamma ray bursts, Paczynski’s contributions were significant, his life cut off all too soon. The astrophysicist died of brain cancer at the age of 67. This Princeton news release summarizes a remarkable career.