In Search of Ancient Stars

We’ve seen recently how difficult it can be to pin down the age of a star. Even the Alpha Centauri system is problematic, with age ranges for Centauri A and B varying from slightly less than four billion years to as many as eleven (depending on which star we’re talking about, and which of several methods was used for the calculation). But one thing that helps with stars that are older than the ordinary is the chemical composition of the star in question. “Surprisingly, it is very hard to pin down the age of a star,” says Anna Frebel (University of Texas), “although we can generally infer that chemically primitive stars have to be very old.”

Frebel’s work has led her to a star that is old indeed. It is HE 1523-0901, now pegged thanks to the work of Frebel’s team at the astounding age of 13.2 billion years, meaning it would have formed not all that long after the Big Bang. The researchers were able to study radioactive elements in the star to create a precise calculation. A spectrograph on one of the 8.2-meter instruments at the European Southern Observatory’s Very Large Telescope in Chile measured uranium and thorium, matching up their indications with readings of europium, osmium and iridium. The star’s amazing spectrum pinned down its age with unusual accuracy. 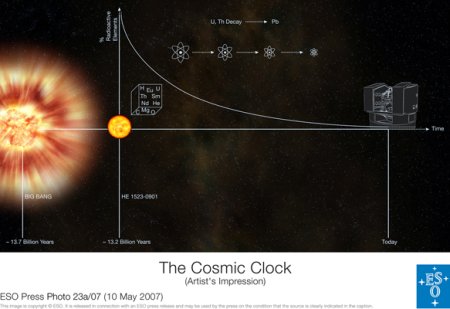 Image (click to enlarge): Astronomer Anna Frebel of the the University of Texas at Austin McDonald Observatory and her colleagues have deduced the star’s age based on the amounts of radioactive elements it contains compared to certain other “anchor” elements, specifically europium, osmium, and iridium. The study of the star’s chemical make-up was made using the UVES spectrograph on the Kueyen Telescope, part of ESO’s Very Large Telescope, at Paranal, in Chile. Credit and copyright: European Southern Observatory.

HE 1523-0901 thus becomes a laboratory for the creation of elements not long after the Big Bang, which is thought to have occurred some 13.7 billion years ago. Finding it was tricky work indeed, for the abundance of a given radioactive isotope decreases over time. “Actual age measurements are restricted to the very rare objects that display huge amounts of the radioactive elements thorium or uranium,” says Norbert Christlieb, co-author of the paper on this work, and that makes finding this ancient star in the first place a remarkable occurrence, or maybe we can just call it, as Frebel does, ‘informed serendipity.’