A Galactic Collision, and the Sun’s Future

I remember a startling painting from an astronomy book I once had when I was a kid. It showed two spiral galaxies much like the Milky Way in the process of collision, and I recall the caption saying that the stars in galaxies were so widely spaced that even in an event like this, few if any stars would collide individually. The galaxies, so the writer surmised, would simply pass through each other, leaving both relatively unscathed.

What made the picture interesting was reading in the same volume that the Milky Way is eventually going to collide with the Andromeda galaxy, so that I had the vivid image of a vast galaxy getting ever closer in the night sky until the entire view was consumed by cities of stars. It was a lovely image, but the idea of galaxies merging without notable disruptive effect is long gone. And new work from the Harvard-Smithsonian Center for Astrophysics has implications for our Solar System as well. 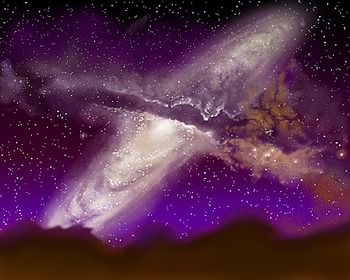 In two billion years, with the Sun still firmly on the main sequence — although considerably brighter and hotter than today — Andromeda will make its first close pass, the two galaxies beginning to intermingle their stars as they swing around each other. It will take some three billion years beyond that, say the CfA’s T.J. Cox and Avi Loeb, for the two galaxies to complete their merger. Far from passing through each other and going their own ways, they would now form a single elliptical galaxy. An animation of the event can be viewed here.

Image: An artist’s impression of the collision of the Milky Way and Andromeda. Credit: James Gitlin/STScI.

By that time, the Sun will have become a red giant, with conditions in our current habitable zone far too extreme for life, and the entire Solar System will have receded from the new galactic center, from the current 25,000 light years to 100,000. And what will be the fate of our species leading up to this era? Here’s an interesting speculation from the paper. Note that the Solar System becomes problematic long before the Sun actually reaches the red giant stage or the galactic collision occurs:

Current evolutionary models (see, e.g., Sackmann et al. 1993) predict that the Sun will steadily increase its size and luminosity for the next 7 Gyr as it slowly consumes all available hydrogen and evolves towards a red giant phase. While this places a strong upper limit to the extent of life on Earth, it is likely that much smaller changes (< 50%) in the Sun’s luminosity will signiﬁcantly alter the Earth’s atmosphere and thus its habitability within the next 1.1-3.5 Gyr (Kasting 1988). Korycansky et al. (2001) suggested that the onset of these eﬀects could be delayed by increasing the orbital radius of the Earth through a sequence of interactions with bodies in the outer Solar System, and we can not rule out the possible colonization of habitable planets in nearby stars, especially long-lived M-dwarfs (Udry et al. 2007) whose lifetime may exceed 1012 years (Adams et al. 2005). In short, it is conceivable that life may exists for as little as 1.1 Gyr into the future or, if interstellar travel is possible, much longer.

Another interesting note is this: Given sufficient time, and assuming that the cosmological constant does not evolve with time (in other words, no slowing of the universe’s accelerated expansion), all galaxies not part of the Local Group will eventually recede and exit our event horizon. At that point, write Cox and Loeb, “…the merger product of the Milky Way and Andromeda (with its bound satellites) will constitute the entire visible Universe.”

The paper is Cox and Loeb, “The Collision Between The Milky Way And Andromeda,” submitted to to the Monthly Notices of the Royal Astronomical Society, and available online. As to visual effects, any observers five billion years from now will see not a strip of stars like the current Milky Way from Earth, but a huge starry bulge that defines galactic center. I like Loeb’s comment: “This is the first paper in my publication record that has a chance of being cited five billion years from now.” It’s interesting to speculate where the citation might appear!

Next post: Helium: Speed Brake for the Solar Wind?