Gamma-ray bursts (GRBs), those titanic explosions in distant galaxies that some consider to be the most powerful events since the Big Bang, can be more luminous than anything else in the universe, at least for a while. But their moment in the spotlight is brief, less than a second to as much as a few minutes, and questions about their origins abound. Astronomers expecting speeds close to the 300,000 km/s of light itself for the material exploding from these bursts have now been vindicated by measurements made at the European Southern Observatory’s La Silla facility. 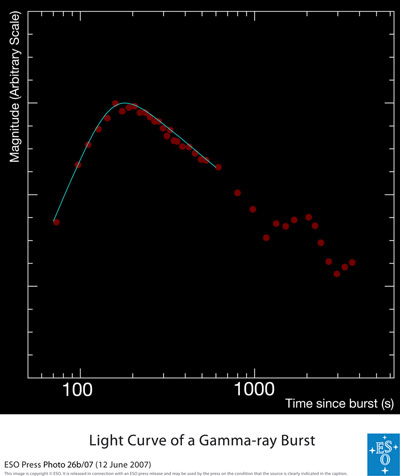 Image: Light curve of the gamma-ray burst of 7 June 2006, GRB 060607A. The red dots are the data obtained with the REM telescope observing the afterglow (in the near-infrared H-band) of the burst from 73 seconds after the explosion. The blue line is a fit to the data, allowing the astronomers to determine the peak of the light curve and so, derive the velocity of the material. (c) ESO.

Space-to-ground coordination is needed to examine GRBs like the two under study, which were first detected by the Swift satellite and followed up by La Silla’s robotic Rapid-Eye Mount (REM) telescope on April 18, 2006 and again on June 7 of that year. The two bursts, some 9.3 and 11.5 billion light years away respectively, created an afterglow visible at optical and near-infrared wavelengths, the result of exploding material ramming into surrounding gas. Direct measurements of the velocity of the exploding material arrived at a value of 99.9997% of the speed of light.

“Matter is thus moving with a speed that is only different from that of light by three parts in a million,” says Stefano Covino, co-author of the study. “While single particles in the Universe can be accelerated to still larger velocities – i.e. much larger Lorentz factors – one has to realise that in the present cases, it is the equivalent of about 200 times the mass of the Earth that acquired this incredible speed.”

Longer-duration gamma-ray bursts like these are thought to be the result of the explosion of massive stars; shorter duration GRBs may originate in collisions between neutron stars and black holes. The paper is Molinari et al., “REM observations of GRB060418 and GRB060607A: the onset of the afterglow and the initial fireball Lorentz factor determination,” Astronomy & Astrophysics 469, L13-L16 (2007), with abstract available online.