“Let’s hope that we find all the dangerous asteroids in the next few months,” says Cornell astronomer Joseph Burns. He’s talking about the Arecibo Observatory in Puerto Rico, which Cornell manages for the National Science Foundation. Word is that Arecibo’s radar system may lose its NSF funding as early as 2008, leaving us without our premier tool for tracking asteroids of the Earth-crossing variety. 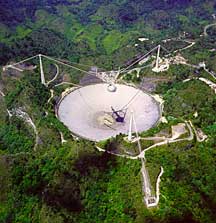 Strictly speaking, Cornell’s Arecibo effort runs through the university’s National Astronomy and Ionosphere Center (NAIC), which will need to find outside partners to pick up as much as half of the observatory’s operating costs or face the threat of total shutdown of the Arecibo telescope by 2011.

It’s hard to understand why, in its deliberations on the matter, the NSF all but ignored the contribution of Arecibo’s radar. In fact, as this Cornell news release makes clear, not a single planetary scientist had a presence on the relevant committee, nor did the term ‘asteroid’ make an appearance in its report. The response from some astronomers has been unambiguous, as in this statement by Cornell’s Jean-Luc Margot:

“Asteroid impacts are the only known natural disaster that can cause ecological disaster and mass extinction. They can be prevented, though, and it is simply irresponsible to neglect a unique warning and mitigation device like the Arecibo radar.”

The key date appears to be September 30, 2008. Absent new funding from NASA, NSF or outside sources, that’s the day Arecibo’s radar will likely be deactivated. $1 million a year is needed to cover operating costs, a bargain in the eyes of some, who point not only to the radar’s capabilities at asteroid tracking, but also its contributions to science, including the discovery of ice at Mercury’s poles and detection of the so-called YORP (Yarkovsky-O’Keefe-Radzievskii-Paddack) effect, which can change the rotation rate of an asteroid.

Do we give up on Arecibo? The Goldstone radar system in California is twenty times less sensitive, not an adequate fallback for planetary science or asteroid tracking. Perhaps NSF will reconsider, heeding the urgings of the chair of the American Astronomical Society’s Division for Planetary Sciences and other astronomers. But this is a classic case for alternate sources, and we’ll watch any attempts to fund Arecibo through the private sector with great interest.

Related: In a request for a Congressional hearing on near-Earth objects (NEOs), Rep. Dana Rohrabacher (R-CA) notes NASA’s March 2007 report “Near Earth Object Survey and Deflection Analysis of Alternatives.” NASA predicts 20,000 objects with the potential energy of 100 megatons of TNT or more that can be considered dangerous to Earth. The Spaceguard program currently aims to detect 90 percent of NEOs with a 75,000 megaton potential. If successful, this program would probably find only 35 percent of the 100 megaton objects. A 100 megaton collision, says Rohrabacher, is predicted to cause a minimum of 50,000 fatalities.