Scientists studying the chemistry of interstellar space have identified around 130 neutral molecules along with perhaps a dozen positively charged molecules, but it was only late last year that the first negatively charged molecule — anion — was found, consisting of six carbon atoms and one hydrogen atom. It was a significant find because logic seemed to suggest that molecules would have a hard time retaining extra electrons, and thus a negative charge, in a star-rich environment.

Now we have a new anion, found using data from the Green Bank Telescope in West Virginia. The molecule is negatively-charged octatetraynyl, consisting of eight carbon atoms and one hydrogen atom, and it’s been located in the envelope of gas around an old, evolved star known as IRC +10 216, about 550 light-years from Earth. That makes three anions found in less than a year and in a range of environments. 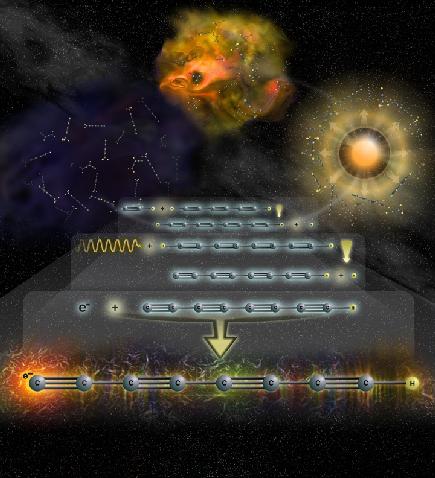 Image: Astronomers using the Robert C. Byrd Green Bank Telescope found the negatively-charged form of octatetraynyl (C8H-) in a cold interstellar cloud (middle left) and in the gaseous envelope surrounding an old, evolved star (middle right). This is the largest negatively-charged molecule yet found in space. The scientists believe it probably is formed in steps, illustrated here, proceeding downward.

NASA’s Jan Hollis (GSFC) has this to say about this significance of the findings:

“Until recently, many theoretical models of how chemical reactions evolve in interstellar space have largely neglected the presence of anions. This can no longer be the case, and this means that there are many more ways to build large organic molecules in cosmic environments than have been explored.”

This is interesting work. What you do to identify such molecules is to figure out what radio frequencies are characteristic of the charged molecule, a task accomplished in a laboratory to nail down the frequency range the astronomers need to look for. A team from the Harvard-Smithsonian Center for Astrophysics (CfA) used such methods (and data from the GBT) to find the same anion in a cloud of molecular gas called TMC-1, which is in the constellation Taurus. It’s likely, based on this work, that many more negatively charged molecules exist in space.

Thus we keep learning more about the different ways complex organic and other molecular types can form, some of which may be precursors to life. The interstellar medium continues to give us clues about how widespread living things may be. The relevant papers are Remijan et al., “Detection of C8H– and Comparison with C8H toward IRC +10 216,” Astrophysical Journal Letters 664 (July 20, 2007), pp. L47-L50 (abstract) and Brünken et al., “Detection of the Carbon Chain Negative Ion C8H– in TMC-1,” in the same issue, pp. L43-L46 (abstract).

Related: University of Arizona astronomers have been examining the supergiant VY Canis Majoris, about 5000 light years from Earth and 25 times as massive as the Sun. The star is huge, but losing mass so quickly that it will be gone in a scant million years. The team have already detected a score of molecules never before found in interstellar space, including table salt (NaCl); a compound called phosphorus nitride (PN), which contains two of the five most necessary ingredients for life; molecules of HNC, which is a variant form of the organic molecule, hydrogen cyanide; and an ion molecule form of carbon monoxide that comes with a proton attached (HCO+). More in this news release.

Do life’s origins go back to the chemistry found in exotic places like the space around VY Canis Majoris? The paper is Ziurys et al., “Chemical complexity in the winds of the oxygen-rich supergiant star VY Canis Majoris,” Nature 447 (28 June 2007), pp. 1094-1097 (abstract).