Theories that explain Earthly cataclysms through astronomy are always fascinating. The notion that a dwarf star dubbed ‘Nemesis’ orbits the Sun and occasionally stirs up cometary debris in the Oort Cloud emerged in the 1980s, published by two independent teams, one of which included Richard Muller. A UC-Berkeley physicist, Muller has since given up on Nemesis, but he’s still looking for the cause of what he sees as a 62-million year cycle (plus or minus 3 million years) in mass extinction events.

Berkeley’s James Kirchner, quoted in this 2005 story on Muller’s work, thinks the evidence Muller and graduate student Robert Rohde have assembled on such extinction cycles “simply jumps out of the data.” Says Kirchner:

“Their discovery is exciting, it’s unexpected and it’s unexplained. Everyone and his brother will be proposing an explanation — and eventually, at least one or two will turn out to be right while all the others will be wrong.”

Muller and Rohde used a huge fossil database of marine organisms developed by the late John Sepkoski Jr. (University of Chicago), one whose data extend back to the time of the ‘Cambrian Explosion,’ the period when so many forms of multicellular life emerged. But while Muller and Rohde pondered alternative explanations for the cycle, two University of Kansas professors have come up with a theory involving the Sun’s position in the Milky Way, one that has gone on to win Muller’s approval. 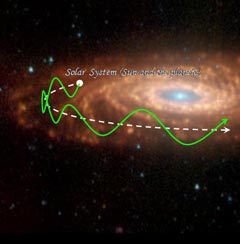 The Solar System moves up and down as it orbits the galactic core (see image at left). Mikhail Medvedev and Adrian Melott, taking that motion into account, factor in the motion of the Milky Way itself, hypothesizing that its leading, north side generates a shock wave that exposes the Earth to high-energy radiation every 64 million years or so. Here’s Melott on the matter:

With a 3-million year uncertainty in the calculations, that 64 million year cycle matches well enough with the 62 million year cycle of extinctions. The match resonates with Richard Muller, who says of the KU team: “They succeeded where I failed in coming up with a possible explanation for the effect that we observed.” And if they’re right, we have time to prepare for the next major event, since the Solar System has just passed the mid-plane of the galaxy. The next peak occurs in ten to twelve million years, assuming the KU theorists are onto something.

The extinction event that cries out for explanation here is the most recent, the Cretaceous/Tertiary dinosaur extinction that dates back some 65 million years. It’s exceptional in this context because it occurred within two million years of the Solar System’s mid-plane galactic crossing. Here’s how the authors deal with that issue in their paper:

[Rohde and Muller] noted that the 62 My signal in the fossil record emerges from integration over almost 9 periods, and while highly signiﬁcant does not coincide exactly with the onset of major extinction events, dated to within uncertainties in geological dating methods. These may be caused by a combination of stresses including for example CR ﬂux variation, bolide impacts, volcanism, methane release, anoxia in the oceans, ionizing radiation bursts from other sources, etc. (It is an interesting aspect of this that the onset of the K/T (“dinosaur”) extinction, generally thought to be due to a bolide impact, coincides within 2 My of mid-plane crossing. Nevertheless, the 62 My cycle is strong and robust against alternate methods of Fourier decomposition and alternate approaches to computing its statistical signiﬁcance.

Next post: Terrestrial Worlds: The Devil in the Details