Musings on a Living Cosmos

George Dvorsky’s ongoing series on the Fermi Paradox, which appears on his Sentient Developments site, is drawn from a recent conference presentation about the implications of Fermi’s question. ‘Where are they?’ indeed, and what factors could explain our inability to find other sentient life forms? Two parts have already run, and I commend them to you. Dvorsky presents a thorough backgrounder on why the ‘great silence’ is puzzling, and goes on to discuss the things we can be sure that advanced extraterrestrial intelligences do not do. This by way of examining assumptions that may flag wrong directions in our thinking.

The first of these statements is interesting: “Advanced civilizations do not advertise their presence to the local community or engage in active efforts to contact.” At least, we might say, in any ways that we’ve so far been able to determine, and it should be fairly straightforward for an alien species that does want to make itself known to us to manage the feat. Dvorsky discusses this in terms of so-called ‘Bracewell probes.’

Think of the Arthur C. Clarke 2001 scenario, ‘sentinel’ probes waiting for an intelligent species to arise and then communicating with it. Such a probe, if in our own Solar System, should have been activated by now, given the amount of electromagnetic noise we’ve been making for the past century. But as Dvorsky says: “We know that no such object exists in our solar system or within a radius of about 25 to 50 light years.”

Nonetheless, the idea that a listening probe should be programmed to activate a communications channel relies on human assumptions. I’m reminded of Freeman Dyson’s statement: “It is unscientific to impute to remote intelligences wisdom and serenity, just as it is to impute to them irrational and murderous impulses. We must be prepared for either possibility.” In other words, watch what you bring to the discussion that is based on things we take for granted. Having no experience whatsoever with alien intelligences, we can’t know whether they would want to meet any cultures they observed or simply catalog and study them. A communicating Bracewell probe is only one of many possibilities.

Gregory Matloff and Anthony R. Martin have written interestingly about the possibility of artificial objects being found in the Kuiper Belt (see the earlier Centauri Dreams story An Infrared Hunt for Artificial Kuiper Belt Objects). Such an infrared search might reveal hypothetical ‘sentinel’ probes that chose to remain silent. So while we can indeed say, with George Dvorsky, that we see no active attempts to contact us, there may well be reasons for such a silence — I suspect this is exactly where Dvorsky is headed with the next installment of his Fermi series.

Another statement also catches the eye: “Advanced civilizations do not engage in any kind of megascale engineering or stellar re-engineering that is immediately obvious to us within our light cone.” Here the key words are ‘immediately obvious’ (Dvorsky knows exactly what he is doing here; he argues with the skill of a trained jurist). The question posed is whether we would be able to recognize the engineering of civilizations a billion years older than our own in the first place. Dvorsky again: “We see no clusters of perfectly aligned stars, nor do we signs of Kardashev III civilizations utilizing the energy output of the entire Milky Way.” 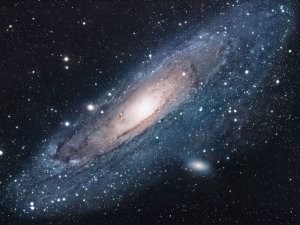 True, but is this what we would expect to see? Perhaps not. Dvorsky accepts Charles Lineweaver’s work on planet formation in the early Milky Way, including the notion that Earth-like planets first formed up to nine billion years ago. With this as assumption, the average terrestrial planet in the galaxy is 1.6 billion years older than the Earth, and Dvorsky notes that three-quarters of Earth-like planets in the galactic habitable zone should be older than Earth. Would a civilization billions of years older than our own be capable of engineering that we might not even recognize as such?

Image: M31, the Andromeda galaxy. Is it possible that the engineering of cultures billions of years older than our own might not be apparent to us? Copyright and Credit: Robert Gendler (robgendlerastropixs.com).

It is not illogical to assume the answer is yes. Some years back, I was doing an interview with Michio Kaku and made a confident statement that we ‘knew that no Kardashev type III civilizations existed in the intergalactic neighborhood,’ to which Kaku responded with disbelief. Why should I think I knew what alien technologies would be like given the time frames we were talking about? His point was that we would be no more likely to recognize such engineering, based on our own assumptions, than an ant colony would be to understand that the superhighway running past nearby was an artifact and a sign of a superior intelligence.

In any case, read through Dvorsky’s list of the things advanced civilizations do not do. It’s stimulating stuff meant to rattle our preconceptions. Why sentient beings might choose other paths is the next topic on Sentient Developments. If I had to guess, I would say that intelligent life is incredibly rare, with perhaps no more than ten civilizations active at any given time in the Milky Way. That would also explain Fermi, I suppose, though not in ways I’m comfortable with. I think all of us hope for and would like to hear reasons to expect more.

Related: Marko Horvat (University of Zagreb) has calculated how likely we are to pick up alien civilizations based upon their lifetimes. Horvat’s figures make radio detections seem highly unlikely. One assumption is that the likelihood of continous beacons that broadcast to specific stars for decades or centuries at a time (much less millennia) is low. That makes detecting unintentional electromagnetic leakage more likely than picking up beacons aimed at us, but also far more difficult.

A key factor: Civilizations presumably move beyond radio and TV toward methods that are all but undetectible in terms of extraneous transmissions. Here, Horvats discusses this in terms of the number of civilizations (Nac) that can occupy the same volume of space at each moment in time:

The highest probability of contact is achieved in the scenarios with many alien civilizations that have comparably short life spans and long usage of radio communications. At the same time, our listening techniques have to be near perfect. The reasons behind this optimum probability are understandable; compared with their lifetime, civilizations always have relatively short radio-communication status. If there are a lot of them, in other words – if they die rather quickly and are replaced with new civilizations, then, at every point in time, there is a fair number of them that are using the radio. Long-lived civilizations pass their radio-communication status and still remain in Nac but are undetectable by radio. In some respect, they are occupying a place in Nac where some younger and radio active civilization might sit.

It is somewhat paradoxical that we should be opportunistic for short-lived alien civilizations, when at the same time, we want to learn more about them.

Table 2 in the appendix here makes for some interesting mulling. The paper is Horvat, “Calculating the probability of detecting radio signals from alien civilizations,” International Journal of Astrobiology 5 (2006), pp. 143-149 (abstract).