Propulsion Clues from a Dark Universe

If you had a device that could manipulate the expansion of spacetime, would you have the makings of a stardrive? Miguel Alcubierre’s ‘warp drive’ concept is based on something like this. The physicist’s 1994 paper points out that the speed of light constraint applies to objects moving within spacetime, but makes no prediction about how fast spacetime itself can move. Inflation theories draw on the same idea, with the early universe suddenly expanding at rates far surpassing light speed.

So think about contracting space in front of your vehicle while creating more space behind it. Distorted spacetime carries the starship along at fantastic velocities while violating no principle dear to Einstein. The trick, of course, is energy, the necessary amount of which has been discussed in various papers. As far as I know, no one has been able to get the figure down below the total energy output of a Sun-like star, but that’s a big reduction over earlier views that it would take all the energy in the universe to make a warp drive work.

Which brings us to dark matter and dark energy, the two elephants in the room of contemporary physics. We seem to be looking at only a fraction of the universe when we gaze into the sky, with perhaps as little as four percent being made up of the things we see. Whatever dark energy does that causes the acceleration of the universe’s expansion, it’s not something that we can observe other than through its apparent effects. But you can see why in the dreams of propulsion theorists dark energy comes into play. Anything that causes the expansion of spacetime’s acceleration plays into our concepts of a genuine star drive.

Dark matter, too, is of great propulsive interest. Understanding it will give us new insights into mass, and since we are interested in accelerating objects to appreciable fractions of lightspeed, we need to know as much as possible about how mass operates (not to mention the mysteries of inertia). We can only detect dark matter through its gravitational effects, one of which is its ability to cause the bending of distant light sources, an effect familiar through our discussions of gravitational lensing. 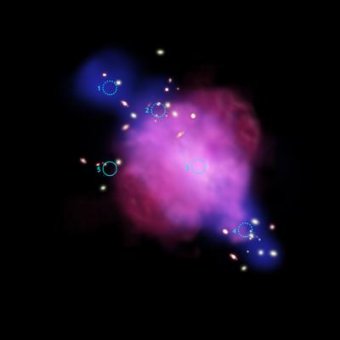 The recent dark matter news is challenging. Scientists using data from the Chandra x-ray observatory have been studying the galactic cluster system called Abell 520, mapping the Chandra data against optical data from Earth-based telescopes. A dark matter core could be identified, but mysteriously enough, it contains hot gas but no bright galaxies. The galaxies and the densest dark matter nearby are separated, the dark matter core in one place, a group of galaxies with no dark matter in the other. “This would be the first time we’ve seen such a thing,” says Hendrik Hoekstra (University of Victoria) and could be a huge test of our knowledge of how dark matter behaves.”

Image: An artist’s illustration of the Abell 520 system shows where the bulk of the matter (blue) is found compared to the individual galaxies (yellow) and the hot gas (red) in the aftermath of a massive galaxy cluster collision. The material shown in blue is dominated by dark matter. As with the Bullet Cluster there are large separation between the regions where the galaxies are most common (peaks 2 and 4) and where most of the hot gas lies (peak 3). However, unlike the Bullet Cluster, a concentration of dark matter is found (peak 3) near the bulk of the hot gas, where very few galaxies are located. In addition, there is an area (peak 5) where there are several galaxies but very little dark matter. These observations conflict with the general understanding that dark matter and the galaxies should remain together, despite a violent collision. This raises questions about the current understanding of how dark matter behaves. Credit: CXC/M. Weiss

So just what are we dealing with here? Gravitational ‘slingshot’ effects that could separate the dark matter don’t seem powerful enough to do the job. Is there an interaction between dark matter particles of which we had no previous idea? And if so, how can we make our observations of other galaxy clusters gibe with what we’re finding in Abell 520? We’ve begun to get used to the notion that a galactic cluster should include large amounts of dark matter. Indeed, dark matter was first hypothesized to explain why individual galaxies look as they do, when visible matter isn’t sufficient to account for the gravitational effects that shape them.

No one can say whether we’re on the edge of new physics or a more conventional explanation may yet emerge. What the universe persists in reminding us, though, is that the frontiers of deep sky astronomy provide potential clues that may one day help us derive a new understanding of mass. Meanwhile, ongoing work on dark energy probes the very substance of spacetime, the manipulation of which may remain forever beyond our grasp. Or perhaps not. A universe that conceals 96 percent of what makes it work surely holds surprises galore for future engineers.

The paper is Mahdavi et al., “A Dark Core in Abell 520,” accepted for publication in the Astrophysical Journal (preprint available). And those who collect classic papers, as I do, may want the reference for Miguel Alcubierre’s “The Warp Drive: Hyper-Fast Travel Within General Relativity,” Classical and Quantum Gravity 11 (May 1994): L73–L77.