A Relativistic Probe of Exotic Matter

We’d like to know a lot more about neutron stars. They’re doubtless the home of exotic matter of the sort we’re unable to create in any laboratory, and their extraordinary density leads to conditions in the space around them that are, shall we say, extreme. Gases whipping around three neutron stars at forty percent of the speed of light have now been used to take measurements of their diameter and mass. 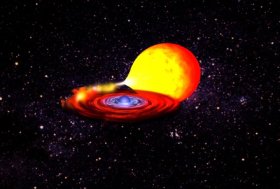 Figure out the properties of such gases and you’ve nailed down a maximum size for the diameter of the neutron star Serpens X-1, for example, a figure that turns out to be between 18 and 20.5 miles across. A team led by Edward Cackett (University of Michigan) looked at the spectral lines from hot iron atoms around Serpens X-1 and two other neutron star binaries, GX 349+2, and 4U 1820-30. Independent work by Sudip Bhattacharyya and team (NASA GSFC) bolsters Cackett’s results and demonstrates the efficacy of the method.

Image: Many neutron stars are accompanied by a companion star, as portrayed in this illustration. The powerful gravity of the neutron star siphons off gas from the companion, which then settles into a slowly in-spiraling disk around the neutron star. Credit: NASA.

The factor at work here is the extreme velocity of the gas, which smears and distorts the iron line because of the Doppler effect and beaming effects that are in accordance with Einstein’s Special Theory of Relativity. Moreover, the powerful gravity of the neutron star warps spacetime (now we’re in the realm of the General Theory) and shifts the object’s iron lines to longer and longer wavelengths. These skewed iron lines tell the tale and the GSFC work confirms it. Says Cackett’s colleague Jon Miller:

“Now that we’ve seen this relativistic iron line around three neutron stars, we have established a new technique. It’s very difficult to measure the mass and diameter of a neutron star, so we need several techniques to work together to achieve that goal.”

It’s a goal that goes beyond the study of exotic particles or states of matter, although that’s a major plus. Because the behavior of these gases in the extreme environment near a neutron star can be deduced from the General Theory, observations like these offer a useful tool for examining and testing that theory’s parameters. In such ways do space-based platforms like the European Space Agency’s XMM-Newton x-ray observatory and the Japanese/NASA Suzaku x-ray observatory, both used in this work, help us mine observational data from a cosmic laboratory where no condition is too extreme to to be modeled.