Asteroid Breakup May Have Doomed Dinosaurs

It’s a disaster scenario that Hollywood has picked up on (think Deep Impact). An incoming object menaces the Earth. Scientists try to destroy it with nuclear weapons, but the horrified populace soon discovers that the blast has simply broken the object into pieces, each with the potential to wreak havoc planet-wide. Now we learn that an impact between two asteroids causing a similar crack-up may have resulted in the cataclysmic event some 65 million years ago that destroyed the dinosaurs.

Researchers from Southwest Research Institute and Charles University (Prague) have been studying the asteroid (298) Baptistina, combining their observations with numerical simulations to model the impact event. As the theory goes, Baptistina’s parent body, some 170 kilometers in diameter, was hit by another asteroid approximately 60 kilometers wide. The result: The Baptistina asteroid family, a cluster of fragments in similar orbits that once included 300 bodies larger than 10 kilometers and 140,000 bodies larger than one kilometer. 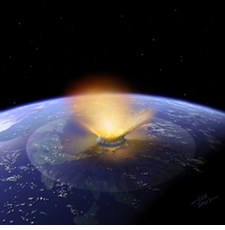 With all the characteristics of a carbonaceous chondrite meteorite, the Baptistina parent asteroid makes a nice match for the impactor that created the Chicxulub crater in the Yucatan. Sediment samples show that it, too, had a carbonaceous chondrite composition, and the team’s simulations produced a ninety percent probability that it was indeed a member of the Baptistina family. Moreover, the simulations indicate that the lunar crater Tycho may also have been produced by an impactor with a Baptistina pedigree.

Image: An artist’s conception of the Chicxulub event. Computer modeling shows that the parent object of asteroid (298) Baptistina, which was approximately 170-kilometers in diameter with characteristics similar to carbonaceous chondrite meteorites, was disrupted 160 million years ago when it was hit by another asteroid estimated to be 60-kilometers in diameter. One result may have been the extinction of the dinossaurs. Credit: Don Davis/Southwest Research Institute.

The original breakup is thought to have occurred some 160 million years ago, after which the fragments’ orbits would have evolved as they absorbed sunlight and re-radiated energy away as heat. Many of the fragments escaped the main asteroid belt and became potential Earth-crossers. The researchers believe that about two percent of these objects actually went on to strike Earth. Call it the ‘Baptistina bombardment,’ a surge in impacts that peaked 100 million years ago.

“We are in the tail end of this shower now,” says William Bottke (Southwest Research Institute). “Our simulations suggest that about 20 percent of the present-day, near-Earth asteroid population can be traced back to the Baptistina family.”

The impact histories of both Earth and Moon seem to support the supposition, showing a two-fold increase in the formation rate of large craters over the past 100 to 150 million years. That should make an emphatic point about the asteroid belt: Its history of collision and orbital change may well play a significant role in the history of our planet. We need to develop and deploy the tools that can alter the orbits of potential impactors, or do we want to assume that our inadequate catalog of Earth-crossing objects will give us time enough to act?