Considering that we can’t see dark matter and have little idea what it is, the notion that we could take its temperature seems preposterous. But new work out of Durham University (UK) points to a way of using visible astronomical sources to draw conclusions about dark matter’s effects in the early universe. Using computer simulations to examine the formation of the first stars, the researchers have applied ‘cold’ and ‘warm’ dark matter models, noting the effects we might expect to see today. These, in turn, should tell us something about how dark matter operates.

Cold, or slow-moving dark matter particles have a particular signature. After the first 100 million years of expansion, dark and more or less uniform, the universe would have begun to witness the birth of structure as dark matter’s gravity drew hydrogen, helium and lithium into the condensations that produced the first stars. In this model, the cold dark matter, clumping into spherical structures, would have produced stars in isolation, one for each dark matter concentration. These are the massive stars that produced the first heavy elements — carbon, oxygen and silicon — necessary for solid planets to emerge. 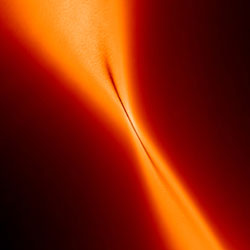 Warm dark matter is a different beast. Its particles in fast motion, the effect would be to replace the ripple-like spread of cold dark matter with long filaments in which large numbers of stars of differing sizes coalesced out of these strands more or less at the same time. Filaments like these would have been extraordinary structures, some 9000 light years long, according to the researchers, who believe the filaments would have fragmented in spectacular bursts of star formation.

Image: In the authors’ simulations, a gas filament condenses and then fragments to form the first stars. The gas heats as it gets compressed but then becomes cold in the center. The red shading in this image reflects changes in the gas’ temperature. Image copyright: Science.

The massive stars spawned by cold dark matter would have short lifespans that would not allow current observations. Stars formed from warm dark matter, on the other hand, should have varied considerably in mass. “A key question that astronomers often ask,” says Tom Theuns (Durham University),”is ‘where are the descendants of the first stars today’?’ The answer is that, if the dark matter is warm, some of these primordial stars should be lurking around our galaxy.”

That means stars we can observe today could hold valuable clues to star formation and dark matter’s nature. Moreover, collapse of the filaments themselves may have seeded the formation of black holes in the centers of massive galaxies. An exotic and far-ranging theory indeed! The paper is Gao and Theuns, “Lighting the Universe with Filaments,” Science Vol. 317. no. 5844 (14 September, 2007), pp. 1527 – 1530 (abstract).

Previous post: Living Off the Land in Space (review)