Centauri Dreams has always been captivated with the Magellanic Clouds, two galaxies that are the Milky Way’s nearest neighbors in space. The fascination is in many respects visual. Knowing that they’re a beautiful sight to those below the equator, the counter-thought came quickly to mind — what would the Milky Way look like from one of these small satellite galaxies? How bright would it be, how much of the sky would it fill? While pondering such questions, have a look at the Large Magellanic Cloud below, and be sure to click to enlarge this gorgeous image.

Pondering such things, I wrote a story called “Magellanic,” a sort of Weird Tales-era fantasy (I realize that Weird Tales still exists, but I refer to the fabled issues of the 20’s and 30’s). Mixing in a first contact scenario in 1920’s Tibet, a mountain-climbing adventurer at the end of his career, a bit of intelligence agency intrigue and throwing in Edwin Hubble for good measure, I thought I had a winner, but the story remained sadly unpublished, reminding me that my talents lie in other directions. 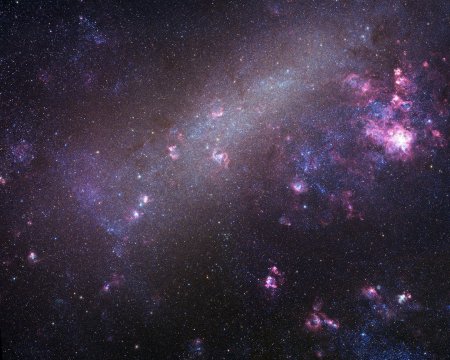 Image: The Large Magellanic Cloud, a fixture in my imagination since childhood. New observations indicate that many of our previous theories about the Magellanics must be radically revised. Credit: Copyright Robert Gendler and Josch Hambsch 2005.

The latest news about the Magellanics is that they may not be satellites at all, but independent galaxies that have approached comparatively recently. Astronomers from the Harvard-Smithsonian Center for Astrophysics have measured anomalously high velocities for the duo, implying that they are not bound to the Milky Way. Thus we throw out many previous theories about the Magellanics and their presumed effects.

For one thing, the Milky Way’s gaseous disk is known to be warped, a fact hitherto explained by gravitational tides due to the Magellanics. The new theory has the Clouds arriving between one and three billion years ago, making it unlikely they are the cause of the warp. And the long hydrogen trail called the Magellanic Stream that extends behind the Clouds was thought to be formed from similar interactions. Knowing that the Magellanics are only passing by tends to rule out this scenario as well.

“We have known about the Clouds since the time of Magellan, and a single measurement has thrown out everything we thought we understood about their history and evolution,” says Gurtina Besla (Center for Astrophysics).

And that’s what makes astrophysics in our era so exciting. For that matter, consider the changes in perspective just since 1998, with the discovery of the universe’s continuing acceleration in expansion. As I keep saying (wishing I was young enough to do it myself, though realizing I was never any good at math), what a time to embark on a career in astrophysical research! In this case, add to the Magellanics mystery that star formation within them must now be completely re-thought and you’ll see that we have another example of reassessment that pushes existing theory to the limit.

The paper is Besla et al., “Are the Magellanic Clouds on their First Passage about the Milky Way?” (abstract).