Tau Zero journalist Larry Klaes here offers a look at a revolutionary telescope that will soon take our vision of the universe into new domains.

In the early half of the next decade, an instrument called the Cornell Caltech Atacama Telescope (CCAT) is planned to examine the Universe through a less-studied region of the electromagnetic spectrum from an observatory in the remote deserts of Chile higher than any current major ground-based facility.

CCAT is the culmination of plans by Cornell University and the California
Institute of Technology (Caltech) initiated in 2004 to jointly conduct submillimeter astronomy with the largest telescope ever conceived for such an endeavor. The 25-meter (82-foot) wide mirror of the CCAT will allow astronomers to see the Cosmos in the area between the infrared and radio realms of the electromagnetic spectrum, an area well beyond the region that is visible to human eyes.

The moisture in Earth’s atmosphere normally blocks light waves coming at our planet from the submillimeter region. This is why CCAT will be built at 18,400 feet atop a dormant volcano named Cerro Chajnantor in Chile’s Atacama Desert. This region of South America is so dry and desolate that robotic Mars rovers have been tested there to approximate conditions on the Red Planet – nearly ideal for a telescope studying the submillimeter wavelengths. 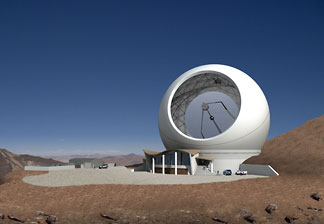 Among the celestial objects astronomers want to study in this realm are
galaxies, especially the ones which formed not long after the Big Bang which created our Universe 13.7 billion years ago, and stars in our Milky Way galaxy with encircling debris disks that may be forming new planets. Even icy bodies in the Kuiper Belt of our outer Solar System will be explored by CCAT to understand how Earth and our neighboring worlds came to be five billion years in the past.

Image: An artist’s rendering of the proposed Cornell Caltech Atacama Telescope that will be built in the Cerro Chajnantor in the Atacama Desert region in Chile. Credit: Cornell University/CCAT.

CCAT will also investigate the mysterious dark matter that makes up the vast majority of the mass in the Universe. Understanding what this material is and how it interacts with clusters of galaxies is of paramount importance to science. The telescope will also look at the equally mysterious dark energy that is apparently causing our reality to expand at an ever-increasing rate.

What will become of our Universe as the galaxies recede from each other is another major goal of understanding for science. For example, the vast islands of stars we call galaxies formed from major clouds of dust and gas. Radiation from these new galaxies was absorbed by all the dust and later re-emitted at longer wavelengths on the electromagnetic spectrum. The radiation was “stretched” to even longer wavelengths as the Universe expanded and galaxies moved further apart from each other until it reached Earth in the submillimeter range. Until recent years and advances in technology, this wavelength was mostly invisible to ground-based telescopes due to its absorption by the aforementioned water that permeates our atmosphere.

The current crop of smaller submillimeter telescopes observe objects in
space a few hundred pixels at one time. CCAT, operating thirty times faster and with a mirror twice as large as its brethren, will observe tens of thousands and eventually millions of pixels at once, creating a clearer picture in the submillimeter realm of the denizens of our Cosmos than ever before.

Complementing CCAT is what will become a collection of eighty large antennae currently being built two thousand feet below the submillimeter telescope’s projected site on Cerro Chajnantor. The Atacama Large Millimeter Array (ALMA) is an interferometer to be operated as a public facility by the National Radio Astronomy Observatory (NRAO) to study the Universe in spectra that include the submillimeter. ALMA will make highly detailed maps of particular regions of space. An image made by CCAT will cover an area of the sky thousands of times larger. Objects of special interest imaged by CCAT will later be examined by ALMA to discern them in finer detail.

The construction of CCAT is expected to begin next year. The first
observations with the telescope are hoped to begin in 2012, with CCAT
becoming fully operational by 2014, about the same time as ALMA.

For more information on CCAT, go here to read the paper presented at the 18th International Symposium on Space Terahertz Technology.