The Allen Telescope Array, devoted both to SETI and astronomical observations, has begun operations. With 42 radio dishes now active, the array ultimately will be used to scan several billion stars in the Milky Way looking for the signals of an extraterrestrial civilization. That’s a staggeringly broad survey, and one that will be followed up by detailed examinations of a million star sample. The ATA is known as Paul Allen’s project, but he’s joined in philanthropy by the SETI Institute and UC Berkeley, among others.

“For SETI, the ATA’s technical capabilities exponentially increase our ability to search for intelligent signals, and may lead to the discovery of thinking beings elsewhere in the universe. It is the first major telescope in the world built specifically for undertaking a search for extraterrestrial intelligence.” 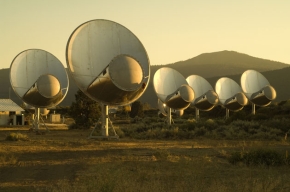 It’s always interesting to track how the press handles such stories, and this Seattle Times‘ article plays it straight, with a description of the installation’s 42 radio dishes northeast of San Francisco (at Hat Creek in the Cascade Mountains north of Lassen Peak) and their potential use for the study of astronomical phenomena — pulsars, supernovae, black holes, gravity waves — as well as the ongoing SETI work. Allen, who also backed the winning entry in the X-prize competition, recalls reading Heinlein’s Rocket Ship Galileo as the defining moment in creating his youthful interest in space.

With the ATA now engaged in active research, we can ponder the differences between it and other observing programs. Time on Arecibo’s huge dish was necessarily limited, with the SETI Institute’s Project Phoenix managing to use the instrument for just three weeks each spring and fall. That added up to a total of 100 observing days between September of 1998 and March of 2004. The Allen Telescope Array offers 24-hour a day access seven days a week.

Moreover, the frequencies available to the ATA — between 1000 and 10,000 MHz — cover five times the range of Project Phoenix. With 350 individual dishes planned for the site, the ATA should be able to examine multiple stars simultaneously, another step up from Arecibo. Thus Project Phoenix’s observations (covering roughly 800 stars) can be upped to the huge numbers Allen’s team envisions, a major step forward for SETI work.

But will the new array produce better results than Project Phoenix itself, which found no sign of intelligent extraterrestrials? As always, that’s the biggest SETI question, and those of us who doubt that advanced civilizations are numerous in the galaxy won’t be surprised if a detection takes a long time, if and when it comes. But the ATA model, using mass-produced 6.1-meter radio dishes and commercial telecommunications technologies, seems the way to go, particularly since it’s backed by philanthropic funding.

$50 million is buying a lot of observing power (see this news release for funding details). We can hope for a breakthrough reception, but even if it doesn’t come, we’re gaining an instrument whose multi-tasking capabilities allow radio astronomy to be conducted on a daily basis even as the search continues. In those terms, this is a gamble well worth taking, and one with significant payout no matter what the SETI outcome.