What we know about gamma-ray bursts is dwarfed by what we don’t, but chipping away at the problem is getting us places, particularly with the help of amateur astronomers. Thus the news that Finnish amateur Arto Oksanen had found the optical afterglow of GRB 071010B, a gamma-ray burst detected by NASA’s Swift satellite. Oksanen did his work with a 40-centimeter telescope at the Hankasalmi Observatory in Finland. 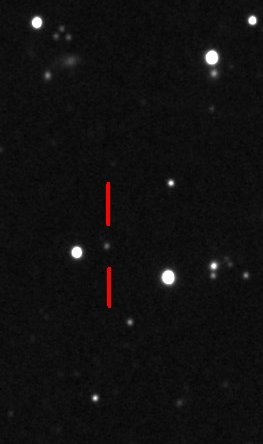 This is the kind of discovery that would have been all but impossible until recently, relying as it does not only on the Swift satellite’s detection capabilities but also on immediate notification of Earth-based observers over the Internet. Remember: Gamma-ray bursts last anywhere from a few milliseconds to a few hundred seconds, and even though they seem to occur once a day, aligning the Swift data with an optical afterglow means looking just as soon as the notification comes in.

Is luck involved? You would think so, and Oksanen agrees:

…you have to be very lucky (and others have to be unlucky) to discover a GRB afterglow nowadays. The sky location of this GRB was a big advantage for me as I was able to observe this one right from the alert being able to ‘look over the North pole’. And this was a bright afterglow and also the weather was good (just after two weeks of cloudy nights).

Hard work pays off, I have been hoping and trying to do this since 1997 when I got interested about GRBs. Indeed “at last!”.

As far as what GRBs are, the question remains unsettled, although GRB 071010B looks to have been a collapsing, supermassive star whose supernova explosion has resulted in a black hole. With Oksanen’s data in hand, the Gemini and Keck telescopes in Hawaii were able to measure the object’s properties, finding a redshift measurement consistent with a distance of at least seven billion light years. Thus the Finn becomes the first amateur to bag a GRB afterglow since 2003, when South African observer ‘Berto’ Monard pulled it off. More information can be found in this news release from the American Association of Variable Star Observers, which coordinates work between amateurs and professionals.

Meanwhile, I’m thinking about Timothy Ferris’ Seeing In the Dark special on PBS (with excellent accompanying site). The book was terrific, but it was fascinating to actually see the assembly of a remote amateur instrument at the New Mexico Skies site, and to watch Ferris handling the incoming image over the Net. When I think about my own tree-obstructed skies, the idea of using the Net to manipulate a remote telescope gets more enticing with every passing day.