Self-Consciousness Among the Stars

As a coda to our recent SETI discussion, two newspaper stories on the subject ran over the weekend. I follow how the media handle this subject because public interest in SETI seems to remain high, and the cultural expectations that show forth in these articles may give us a glimpse of what would happen in the event of an actual detection. Moreover, the Allen Telescope Array has re-focused attention on this quixotic endeavor.

Sometimes it seems that we humans give ourselves too much importance in the cosmic scheme of things. After all, what would our little planet have to offer in a galaxy that, as The Age (Melbourne) notes, is made up of 100 billion stars (and there’s that number again, 100 billion, which reminds me that estimates of our Galaxy’s stellar population range from this low-ball figure all the way up to Timothy Ferris’ whopping one trillion). Aren’t humans, we ask, just one more backward species trying to evolve?

Maybe, but the problem is that we have no way of knowing the answer. If we are the only civilization in the Orion Arm, then we’re hugely significant. If we’re one of ten thousand, then we’re not. Without further evidence, we can’t draw any conclusions. The Age notes that even as the Allen Array comes online, the southern hemisphere has been without a SETI search since 2005. In fact, there remain unanalysed data left over from Southern SERENDIP, which began in 1998 at the Parkes Observatory and now, absent government funding, languishes.

“We’ve got stacks of CDs full of data that we just haven’t had a chance to get through because there’s a shortage of time and staff. A couple of hundred thousand dollars wouldn’t go astray. That would get our equipment up and free us from our teaching duties to get some analysis done. The thing my colleague and I hate the most is that we started all this and we haven’t been able to complete the first bit, put it to bed, as it were.”

It would be useful to resurrect funding at Parkes, given that although the Allen instruments will be able to cover a wide swathe of the Galaxy, a southern skies search opens up even more celestial real estate. The Allen attempt starts out listening to billions of star systems toward the galactic center, but then focuses in on individual nearby stars. A renewed Parkes search wouldn’t have that range but would at least complement the ambitious Allen instruments and extend the hunt.

Ben Bova, meanwhile, in an article in the Naples Daily News, notes that the oldest stars are doubtless drenched with radiation associated with the black hole at the galactic core. But elsewhere, in the ‘suburbs’ of the disk, doesn’t it just take time to raise up an intelligent species? Maybe, but perhaps they’re extinguished by asteroid and comet collisions or destroy themselves through misuse of their own technology. Bova, a science fiction writer and former editor of Analog, wonders too about just what it is that we mean by intelligence.

Or maybe [writes Bova] intelligence is not as inevitable as we assume. After all, Earth existed for almost all of its nearly 5 billion years without an intelligent species. Maybe intelligence is just a special kind of adaptation, not an inexorable end point of evolution. Of all the myriads of species on Earth, only one has produced true intelligence. 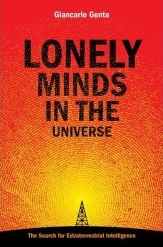 Giancarlo Genta, who has written wisely and sanely about SETI in his new book Lonely Minds in the Universe (New York: Copernicus, 2007), would add that we don’t really know whether intelligence and self-consciousness always co-exist. Just how anthropomorphic do we want to be in our definition of these things? Let me quote from the book:

Human beings are both intelligent and self-conscious but, if it may be easier to give a theoretical definition of consciousness than of intelligence, it is much more difficult to tell whether a being is self-conscious or not. Besides, it is not even clear whether consciousness is a ‘discrete’ characteristic (i.e., a characteristic that either is present or is not), or a ‘continuous’ one (i.e., one that may exist in different degrees).

On Earth, consciousness and intelligence appear to be strictly related to each other. Will it be so when (and if) we discover other intelligent beings?

So many questions, and looming above them all that big Fermi question — where are they? I suspect SETI will be a long, hard search. And if it ever does snag an undisputed signal from an extraterrestrial civilization, I would wager that it won’t be a directed beacon but an extraneous transmission that we’ll probably never be able to decipher. A huge event in human history, to be sure, but forever enigmatic, reminding us that in terms of communication, the distance between species, as sometimes between individuals, may dwarf our merely human comprehension.