A Gravitational Explanation for Dark Matter

Because dark matter has never been directly observed, we’re left trying to figure it out using deductions based on its presumed effects on visible matter. Seven dwarf satellite galaxies of the Milky Way — Carina, Draco, Fornax, Leo I, Leo II, Sculptor and Sextans — offer a case in point. Stars in these galaxies do not move more slowly the farther they are from their galaxy’s core. Is dark matter the explanation?

Mario Mateo (University of Michigan) has been studying the velocity of almost 7,000 stars in the seven dwarfs. His observations lead to the same kind of deduction already been made for larger spiral galaxies, that the matter we see does not account for the apparent distribution of mass throughout the galaxy. All that, of course, depends upon subjecting these observations to established theory. Mateo colleague Matthew Walker (now at the University of Cambridge) puts it this way:

“We have more than doubled the amount of data having to do with these galaxies, and that allows us to study them in an unprecedented manner. Our research shows that dwarf galaxies are utterly dominated by dark matter, so long as Newtonian gravity adequately describes these systems.”

But there are those who argue that it does not. You can explain dark matter under other theories as well, but when you do this, you have to start tinkering with some basics of modern physics. While the Michigan team travels to Cambridge MA to present its findings on the 30th, Canadian researchers are pushing a different model, one based on the idea that there is no dark matter. Modified Gravity theory (MOG) takes Newtonian/Einsteinian gravity in a new direction, and if correct, could explain not only the motion of distant galaxies but objects closer to home. 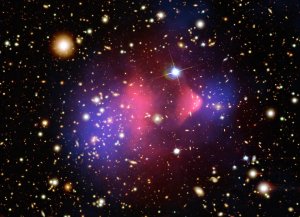 For John Moffat (University of Waterloo, Ontario) and graduate student Joel Brownstein are arguing that they can explain stellar and galactic motion as well as the anomalous deceleration of the Pioneer 10 and 11 space probes by using Modified Gravity theory, which Moffat has been developing for the last thirty years. Their work involves the Bullet Cluster, two merging clusters of galaxies some three billion light years from Earth in the direction of the constellation Carina.

Image: This composite image shows the galaxy cluster 1E 0657-56, also known as the “bullet cluster.” This cluster was formed after the collision of two large clusters of galaxies. Hot gas detected by Chandra in X-rays is seen as two pink clumps in the image and contains most of the “normal,” or baryonic, matter in the two clusters. The bullet-shaped clump on the right is the hot gas from one cluster, which passed through the hot gas from the other larger cluster during the collision. An optical image from Magellan and the Hubble Space Telescope shows the galaxies in orange and white. The blue areas in this image show where astronomers find most of the mass in the clusters.
Credit: X-ray: NASA/CXC/CfA/M.Markevitch et al.; Optical: NASA/STScI; Magellan/U.Arizona/D.Clowe et al.; Lensing Map: NASA/STScI; ESO WFI; Magellan/U.Arizona/D.Clowe et al.

Although previous studies have concluded that gravitational lensing associated with the Bullet Cluster demonstrates the presence of dark matter, Moffat and Brownstein think that normal matter in the cluster can account for the observed lensing. Assuming, of course, that the MOG theory is right. And we should be getting more answers as the search for dark matter continues. Says Moffat:

“If the multi-billion dollar laboratory experiments now underway succeed in directly detecting dark matter, then I will be happy to see Einsteinian and Newtonian gravity retained. However, if dark matter is not detected and we have to conclude that it does not exist, then Einstein and Newtonian gravity must be modified to fit the extensive amount of astronomical and cosmological data, such as the bullet cluster, that cannot otherwise be explained.”

Fair enough, and the beauty of that is that either way we win, with a deeper understanding of dark matter through direct observation, or a growing knowledge of how current gravitational theory can be enhanced. The Michigan study is Walker et al., “Velocity Dispersion Profiles of Seven Dwarf Spheroidal Galaxies,” Astrophysical Journal 667 (September 20, 2007), L53-L56 (abstract). The Modified Gravity paper is Brownstein and Moffat, “The Bullet Cluster 1E0657-558 evidence shows Modified Gravity in the absence of Dark Matter,” accepted for November publication in Monthly Notices of the Royal Astronomical Society (abstract).