A Volcanic Cause of Dinosaur Extinctions?

The Chicxulub crater in the Yucatan gets plenty of press whenever the subject of asteroid deflection comes up, it being the supposed evidence of the ‘dinosaur killer’ that changed life on Earth forever some 65 million years ago. But other factors may have played a role in the dinosaur extinctions, among them geological events in India, now studied in the form of the so-called ‘Deccan Traps,’ immense lava beds that show the ancient flow of lava from the same era over an area of hundreds of miles. 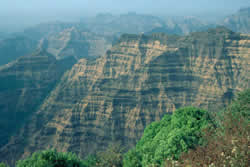 If current work is correct, the main phase of these eruptions released ten times the amount of climate-altering gases into the atmosphere as Chicxulub itself, which would have occurred more or less at the same point in geological history. And if iridium deposits were an early clue to what happened in the Yucatan, marine sediments and microscopic marine fossils point to the power of the volcanoes. The life forms that created these fossils are known to have evolved just after the extinction event.

Image: A vertical mile of Deccan lavas visible from Arthur’s Seat at Mahabaleshwar. Are we looking at the epicenter of the event that killed the dinosaurs? Credit: Mike Widdowson.

The era we’re talking about is defined by the Cretaceous-Tertiary (or K-T) boundary. The problem has been narrowing the date of the possibly causative eruptions to this chronological window. The microfossils help because they associate the primary eruptions with the immediate aftermath of the mass extinction event. The same microfossil formations were found 1000 kilometers from the center of the Deccan Traps at a place called Rajahmundry, where two lava traps contain four layers of lava each. Sediment with the microfossils is found just above the lower trap, the one involved in the primary phase of the Deccan eruptions.

Gerta Keller (Princeton University), who presented these results at the annual meeting of the Geological Society of America in late October, sees the findings as an indicator that Chicxulub may have to be demoted:

“Our results are consistent and mutually supportive with a number of new studies, including Chenet, Courtillot and others (in press) and Jay and Widdowson (in press), that reveal a very short time for the main Deccan eruptions at or near the K-T boundary and the massive carbon dioxide and sulfur dioxide output of each major eruption that dwarfs the output of Chicxulub. Our K-T age control combined with these results strongly points to Deccan volcanism as the likely leading contender in the K-T mass extinction.”

Thus the main Deccan volcanic events seem to have ended at the same time as the K-T boundary, offering powerful evidence for this interesting theory. The slow recovery of marine species over a period of 300,000 years following the extinction event may also be explained by subsequent Deccan eruptions, the last of which occurred 280,000 years later.

These findings introduce yet another argument for not restraining the human species to a single, fragile world, one menaced not only by Earth-crossing asteroids and comets but by geological processes that are, if anything, much more beyond our technological control. A robust human expansion into nearby space continues to be good long-term insurance, as the fractious history of Earth continually insists.

Addendum: Will Baird offers quite an interesting take on all this, contrasting the Permian extinction with the K-T event on his blog The Dragon’s Tales. Be sure to read the whole thing, and note this:

The fact of the matter is that these two extinctions killed in very different ways. These two extinctions effected organisms of different types. They cannot be caused by the same mechanism. Extinction events are not just something that has a geochronologically convenient ‘explanation.’ That explanation has to fit the pattern of that extinction as well as the time frame.