Finding Antimatter in the Solar System

James Bickford’s antimatter work for NASA’s Institute for Advanced Concepts, a Phase II study completed just as NIAC was announcing its closure, prompted a number of comments from readers when I opened discussion of it on Monday. And I can see why. We’re used to thinking of antimatter production as an extraordinarily expensive process happening only in particle accelerators. And even when we commit the resources to make it, we get only the tiniest amounts, and at costs so high that they make propulsion concepts for antimatter seem chimerical.

But Bickford wants us to consider a naturally occurring source of antimatter, one that might offer the potential of being collected in space for a variety of missions. Key to the idea is the fact that high-energy galactic cosmic rays (GCR) continually bombard the upper atmosphere of the planets in our Solar System, as well as interacting with material in the interstellar medium. The result is ‘pair production,’ the creation of an elementary particle and its antiparticle. The kinetic energy of the GCR particle is converted into mass when it collides with another particle.

When Bickford analyzed this natural source of antimatter, he realized that about a kilogram of antiprotons enters our Solar System every second, but only a few grams reach the vicinity of the Earth in a year. That would seem to make collecting naturally produced antimatter impossible save for one thing. Planets with strong magnetic fields create properties in nearby space that can create much larger fluxes as the particles interact with both the magnetic field and the atmosphere.

Here’s Bickford on the process near the Earth:

In comparison to artificial production, natural sources of antimatter are plentiful and relatively easy to exploit for benefit. A natural antiproton radiation belt is generated in a manner analogous to the traditional Van Allen radiation belts, which surround the Earth. The high-energy portion (E>30 MeV) of the proton belt is primarily formed by the decay of neutrons in the Earth’s magnetosphere. The GCR flux interacts with the planet’s upper atmosphere to release free neutrons with a half-life of just over 10 minutes. A fraction of these neutrons travel back into space (albedo) and decay into a proton, electron, and an anti-neutrino while still within the influence of the magnetosphere.

What happens next? The magnetic field of the planet forms a ‘bottle’ that can hold the protons and electrons formed during the decay process. The Lorentz force causes the particles to spiral along the magnetic field lines in a slow drift around the planet. And the process is self-replenishing: As particles are lost through diffusion, new ones are generated so that the supply is relatively static. Bickford sees the same processes at work for the antiparticles produced from pair production. Quoting the report:

The interaction of cosmic radiation with the upper atmosphere also produces antiparticles from pair production… The produced antineutrons follow a trajectory primarily along the path of the original cosmic ray, but can be backscattered after interacting with the atmosphere. These albedo antineutrons decay in a manner similar to the regular neutrons. However, the antineutron will decay into a positron, antiproton, and neutrino and therefore acts as a source for the antiparticle radiation belts surrounding the Earth. The physics that govern the trapping and motion are identical between the particle and its antiparticle with the exception that the two will spiral and drift in opposing directions due to their opposing electric charges.

Working through the possibilities in the Solar System, Bickford examined their capabilities at generating antimatter. And here’s where the surprise comes in. You would think that Jupiter would be the gold mine of antiproton production, given its size and field strength, but it turns out that the magnetic field actually shields the Jovian atmosphere from the GCR production process, lowering its effect. If you want better antiproton production, go to Saturn, where a larger flux reaches the atmosphere and, as Bickford notes, “…the antineutrons that are copiously produced in the rings do not have to be backscattered to yield stable trapping.”

But here’s another surprise: “…the highest flux is actually found around Earth where the relatively slow radial transport in the magnetosphere produces long residence times, which allow the antiproton trap to fill over a period of years.” So Earth’s radiation belts give us our most intense localized source of antiprotons, while the greatest total supply of antiprotons is the magnetosphere of Saturn. In fact, reactions in Saturn’s rings inject almost 250 micrograms per year into the planet’s magnetosphere. 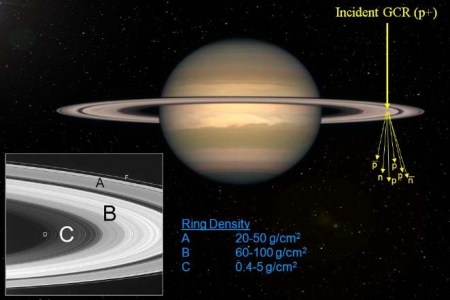 Image: Antiparticle generation in Saturn’s rings. Will the giant planet turn out to be a source for the antimatter that can drive future space missions? Credit: James Bickford.

With this in mind, we need to look at collection options. How do we get at this stuff and store it for future use? Tomorrow we’ll take a look at a baseline concept that Bickford thinks could extract large quantities of these trapped antiparticles from space. And we’ll check out mission designs that might flow out of these proposals, as well as the technologies necessary to make them happen.

If Bickford is right, available antiproton supplies in our Solar System are sufficient to power the nanogram to microgram-level missions we discussed earlier, such as the Antimatter Catalyzed Microfission/Fusion (ACMF) mission designed at Penn State and the ‘antimatter sail’ concept Steven Howe developed for NIAC. And that’s a fine start for true interstellar precursor missions, one that gets us into the antimatter game in a serious way and points to better (and faster) things to follow.

James Bickford’s Phase II report is titled “Extraction of Antiparticles Concentrated in Planetary Magnetic Fields.” Although produced for NIAC, it is not yet available on the Institute’s server. E-mail me if you are interested in seeing a copy.