The Origin of High-Energy Cosmic Rays?

We have much to learn about cosmic rays but the basics seem established. They are protons and subatomic particles including the nuclei of atoms like hydrogen, oxygen, carbon, nitrogen or iron. Low-energy cosmic rays are known to come from the Sun and presumably other stars, while medium-energy cosmic rays can be explained through stellar explosions. But there are events so powerful that they dwarf all others. A cosmic ray with an energy of 300 billion billion electron volts was detected in 1991, the highest levels ever associated with the phenomena.

Where do such ultra-high energy particles come from? They’re 100 million times more energetic than anything we can produce with particle accelerators. Fortunately, the fact that they travel more or less in a straight line, not being deflected as strongly as their lower-energy cousins, makes observations of their origin possible. Now the more than 370 scientists working with the Pierre Auger Observatory in Argentina think they have found the source: The centers of active galaxies with supermassive black holes, known as Active Galactic Nuclei (AGN). 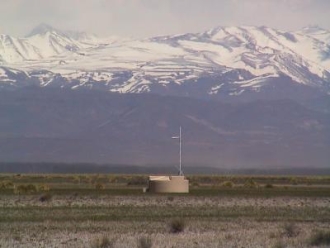 The idea makes intuitive sense even if the correlations the scientists have found need to be weighed against data from other groups in order to be confirmed (and it must be said that we still have much to discover about the specific processes that drive this type of cosmic ray across the universe). The Auger collaboration focused its work on the 77 ultra-high energy cosmic ray events recorded since 2004, when it began collecting data. The observatory detects particles from air showers, created when the cosmic rays encounter the upper atmosphere, cascading into secondary particles that can spread across forty or more square kilometers.

By ultra-high energy, we’re talking about cosmic rays with energy above 4 x 1019 electron volts, or 40 EeV. And it turns out that the highest energy events Auger has detected — the 27 events with energy above 57 EeV — did not arrive at the Earth from random directions. The group compared them with the known locations of 318 Active Galactic Nuclei, finding the cosmic rays correlated well with the locations of AGNs in nearby galaxies like Centaurus A. Galaxies with an AGN seem to be those that have suffered a collision with another galaxy or otherwise experienced a massive disruption in the last few hundred million years.

The data seem compelling: A random origin would imply that only five or six of the high energy events would correlate with the known locations of active galaxies. The researchers believe there is only a one in one hundred chance that what they are seeing is random. That the AGNs themselves are relatively nearby is accounted for by the assumption that ultra-high energy cosmic rays from more distant sources would lose energy before reaching Earth because of interactions with the cosmic microwave background.

With the most energetic cosmic rays hitting the Earth only rarely — about one event per square kilometer per century — it takes a large observing platform to record useful information about them. But Auger’s unique configuration in Argentina seems up to the task. It’s an array of detectors covering 1200 square miles and including 1400 particle detectors, with 1600 planned. The detectors are large, instrumented water tanks that can detect the particles produced by air showers (see image above). In addition, four sites with a total of 24 telescopes detect the flashes that occur when a cosmic ray triggers such a shower.

Among the flurry of news releases covering the cosmic ray news, this one from the University of Utah provides perhaps the most comprehensive backgrounder (and that makes sense, as Utah is home to the High Resolution (HiRes) Fly’s Eye experiment, a cosmic ray detection project on a smaller scale than Auger). The paper from the Pierre Auger Collaboration (with extensive list of authors listed at the end) is “Correlation of the Highest-Energy Cosmic Rays with Nearby Extragalactic Objects,” Science Vol. 318. No. 5852 (9 November 2007), pp. 938-943 (DOI: 10.1126/science.1151124). Abstract available.