One of the things I like about Norway is that the government there requires at least one percent of public building budgets be devoted to artwork. Thus the plan for the Svalbard Global Seed Vault, which is designed as a hedge against planetary catastrophe. At the Spitsbergen site near the town of Longyearbyen, highly polished metal sheets installed on the roof and front of the entrance portal will create a sparkling sculpture visible for miles around, lit by the Sun or by fiber-optics during the long Arctic winters. 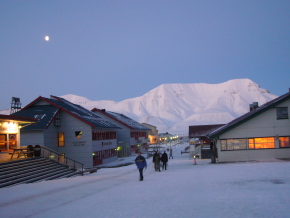 I would imagine Norwegian artist Dyveke Sanne took the commission as quite a challenge. How do you capture the spirit of what is essentially a fail-safe backup of the world’s vital food crops? Assume for a moment that we do get a massive blow one day from an Earth-crossing asteroid and our survivors, provided there are some, will want to re-start agriculture with the basic crops — wheat, barley, peas, corn. And not just the basics, for it may be necessary to start over again in almost any part of the world.

Image: The town of Longyearbyen, near the site of the Svalbard Global Seed Vault. Credit: Heidi Eriksen, Ministry of Agriculture and Food.

The site on the Svalbard archipelago can hold up to 4.5 million seed samples, meaning almost every variety of food crops on the planet can find a home there. The trick is to keep the seeds safe for centuries, up to a thousand years. In mid-November, the site began the crucial cooling down phase preparatory to its official opening early next year, using a 30 kilowtt refrigeration system brought over from the mainland. Over the next two months, the temperature of the sandstone rock around the vault will drop from the current -5 degrees Celsius to -18 degrees.

Magnus Bredeli Tveiten works with Statsbygg, the Norwegian government’s Directorate of Public Construction. Having surveyed the project from top to bottom, the Seed Vault’s project manager is confident of the result. “We ran a lot of computer simulations to determine the optimum approach and believe we have found a very effective and especially energy efficient way to establish reliably cool conditions inside the vault,” says Tveiten. “We believe the design of the facility will ensure that the seeds will stay well-preserved even if such forces as global warming raise temperatures outside the facility.”

It’s a remote place, this doomsday vault, located at the end of a 120-meter tunnel blasted into a mountain on what is surely one of the least accessible populated places on the planet. Long-term cooling will be maintained by natural permafrost, snow and ice, supplemented by a 10 kilowatt refrigeration system once the target temperatures are reached. With Spitsbergen now into its three month night, cooling should proceed without difficulty. As to that artwork, consider it a monument to human foresight, a marker for a resource we may hope we’ll never have to use in the kind of emergency it seeks to ameliorate.

A long way from Svalbard to Centauri? Perhaps, but bear in mind that the first priority of a space-based infrastructure — the kind that will eventually produce the technologies that make at least robotic interstellar missions possible — is to protect the most precious asset we have, our own planet. While we wrangle over Arecibo funding and question whether we should spend the money to identify dangerous asteroids, the Svalbard project is a case of taking the long view in case we’re foolish enough to let our environment be destroyed.