Cassopeia A is a supernova remnant some 11,000 light years away. Turning the attention of the Spitzer Space Telescope on this object allows us to examine the different elements within it, a useful exercise because it helps to answer a question about the early universe: Where did the interstellar dust so essential for the formation of stars and planets — not to mention the creatures that live on planets like ours — come from?

Despite the ubiquity of space dust, the question has persisted because the first stars, so-called Population III, are the only ones to have formed without dust. We can see dust being pumped out by dying solar-type stars in the nearby universe, but in the infancy of the cosmos, such stars weren’t old enough to perform the job. So massive Population III stars are thought to have contributed dust in their violent death as supernovae, a theory in support of which Cassiopeia A provides data. 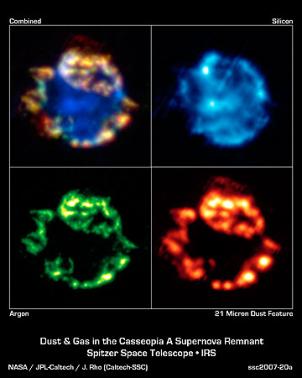 Jeonghee Rho (Spitzer Science Center, Caltech) seems certain of the result: “Now we can say unambiguously that dust – and lots of it – was formed in the ejecta of the Cassiopeia A explosion. This finding was possible because Cassiopeia A is in our own galaxy, where it is close enough to study in detail.” That’s helpful to know, but it doesn’t limit dust formation to supernovae alone. Other avenues exist for dust formation, including highly energetic black holes, whose role remains to be clarified.

Image (click to enlarge): The upper left panel is a composite made up of three infrared views shown in the remaining panels. The bottom left view shows argon gas (green) that was synthesized as it was ejected from the star. The bottom right view shows a collection of dust (red), including proto-silicates, silicate dioxide and iron oxide. The fact that these two features line up (as seen in yellow in the combined view) tells astronomers that the dust, together with the gas, was created in the explosion. The upper right panel shows silicon gas (blue) deep in the interior of the remnant. This cooler gas, called the unshocked ejecta, was also synthesized in the supernova blast. Credit: NASA/JPL-Caltech.

The mapping of Cassopeia A generates data on proto-silicates, silicon dioxide, iron oxide, pyroxene, carbon, aluminium oxide and other compounds. A close match between dust and ejecta expelled in the explosion ties the formation of the dust to the stellar blast. Rho’s team believes the dust would form days to months after the explosion, when the temperature of the gas in the ejecta has had the chance to cool. And although enough dust to form 10,000 Earths has been located in Cassopeia A, the quantity involved still doesn’t completely explain early dust formation, though it comes close. As the paper notes, “The freshly formed dust mass derived from Cas A is sufficient from SNe [supernovae] to explain the lower limit on the dust masses in high redshift galaxies.”

Next for such work: Studies of other supernovae at a range of distances, and better models for understanding how dust is destroyed. The paper is Rho et al., “Freshly Formed Dust in the Cassiopeia A Supernova Remnant as Revealed by the Spitzer Space Telescope,” accepted by The Astrophysical Journal (abstract).