Active SETI and the Public

When it comes to understanding possible extraterrestrial civilizations, I’m with Freeman Dyson, who had this to say:

“Our business as scientists is to search the universe and find out what is there. What is there may conform to our moral sense or it may not…It is just as unscientific to impute to remote intelligences wisdom and serenity as it is to impute to them irrational and murderous impulses. We must be prepared for either possibility and conduct our searches accordingly.”

As quoted in a 2005 essay by Michael Michaud, Dyson saw two alternatives: Intelligent races may rule their domains with benign intelligence, occasionally passing along the knowledge they have accumulated to a universe eager to listen. Or intelligence may be purely exploitative, consuming what it encounters. We don’t know which of these alternatives prevails, if either, and that’s one reason that Michaud, a former diplomat who became deputy assistant secretary of state for science and technology, resigned from the International Academy of Astronautics’ Permanent Study Group dedicated to SETI in September. The issue: Active SETI, not just listening but beaming signals at will to other stars. 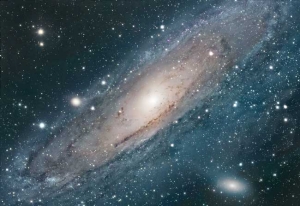 If you want to have a good look at the controversy, read David Grinspoon’s article “Who Speaks for Earth,” as comprehensive a look at the issue as I’ve seen. Grinspoon is a scientist at the Southwest Research Institute (Boulder, CO) as well as the author of Lonely Planets: The Natural Philosophy of Alien Life (Harper, 2004). Two years ago we looked at his provocative ideas about life on Titan in a Centauri Dreams posting.

Image: M31, the Andromeda Galaxy. Are ‘cities of stars’ like these home to benign species exchanging information, or are there threats we know nothing of that make silence a better choice? Credit: NASA.

Running in SEED Magazine, Grinspoon’s latest article should receive plenty of attention, a good thing given the fact that most people either don’t know that signals have already been sent (not just from Arecibo but to nearby stars from the Evpatoria planetary radar site in the Crimea), or else think that sending signals is a harmless exercise, because surely extraterrestrial civilizations are, though entertaining, pure science fiction.

And perhaps they are — people like me think they’re vanishingly rare — but the point is that we have nothing more than speculation to work with. Meanwhile, what would we do if we ever did receive an actual SETI signal? The First SETI Protocol was drawn up in the 1980s to address the issue, laying down procedures that begin with notifying the worldwide SETI community, verifying the potential alien signal, then announcing it to the public. No reply would be sent without first establishing a global consensus.

That latter, of course, is the sticking point. As Grinspoon explains, a Second SETI Protocol should have tuned up our policy for sending messages from Earth, but arguments over whether it should only affect responses to received messages — or messages sent before any extraterrestrial signal was detected — have complicated the picture. Language calling for international consultations before we make further deliberate transmissions was deleted from Michaud’s draft of the Protocol when the Permanent Study Group of the SETI subcommittee of the IAA met last year in Valencia.

Grinspoon’s article is a calm assessment of the current situation, and I recommend it to you. He discusses the work of Alexander Zaitsev at Evpatoria, whose team has sent a series of messages toward nearby stars. Remember that Frank Drake’s Arecibo message of 1974, the first active SETI attempt I know of, was aimed at the globular cluster M13, some 25,000 light years away, and was thus something of a scientific exercise rather than a active attempt to open a communications channel. But the stars reached by the Evpatoria messages are between 45 and 70 light years from Earth, more or less in our back yard.

Discussions between the two camps continue. But two Grinspoon points merit special attention. One is that the kind of facilities that can make active SETI broadcasts are today largely in the hands of national governments or large organizations answerable to public opinion. Will it always be so? Grinspoon says no:

…seemingly inevitable trends are placing increasingly powerful technologies in the hands of small groups or eager individuals with their own agendas and no oversight. Today, on the entire planet, there are only a few mavericks like Zaitsev who are able and willing to unilaterally represent humanity and effectively reveal our presence. In the future, there could be one in every neighborhood.

Which is one reason why public indifference to the question of broadcasting to the stars may not last much longer. In fact, the Grinspoon article may be a watershed event in changing awareness. The issues are clearly large. As David Brin has been pointing out since the 1980s, one possible answer to our failure to detect other civilizations is that there may be a reason why such civilizations would want to remain silent. Is there a threat to emerging intelligence that could make our attempt to draw attention to ourselves a dangerous mistake? We can’t know at this juncture, which makes deliberate broadcasts something of a shot in the dark. And that dark is quite impenetrable at present.

Grinspoon also makes the point that the entire discussion on active SETI may in itself be a good thing for our own understanding. Let me quote him again:

…even if no one else is out there and we are ultimately alone, the idea of communicating with truly alien cultures forces us to consider ourselves from an entirely new, and perhaps timely, perspective. Even if we never make contact, any attempt to act and speak as one planet is not a misguided endeavor: Our impulsive industrial transformation of our home planet is starting to catch up to us, and the nations of the world are struggling with existential threats like anthropogenic climate change and weapons of mass destruction. Whether or not we develop a mechanism for anticipating, discussing, and acting on long-term planetary dangers such as these before they become catastrophes remains to be seen. But the unified global outlook required to face them would certainly be a welcome development.

These are welcome words, highlighting the fact that the issues we confront as we look for extraterrestrial civilizations are just as significant for our own dealings here on Earth, where other cultures can sometimes seem as inscrutably alien as anything we might find through a radio telescope search. And Grinspoon is surely right about the proliferation of technologies expanding active SETI in the future. We need to be raising public consciousness on this issue and getting the entire active SETI question into broader forums, where people from a wide range of backgrounds, in and out of the sciences, can address it. We need to do that so we act not as individuals but as a species, looking out into a universe that may or may not welcome us as friends.