How likely is it that we will begin to image extrasolar planets from observatories on the ground? The prospect seems all but certain if we grant a long enough lead time to get certain advanced telescope designs built, but it may happen sooner than we think if the news from the Subaru Telescope is factored in. The instrument, an 8.2 meter optical/infrared telescope, is located at the summit of Mauna Kea (Hawaii), from which vantage it has already produced intriguing results like spin-orbit alignment measurements for the exoplanet TrES-1. 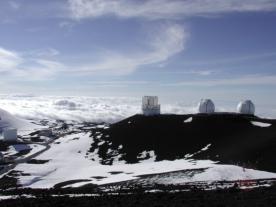 But Subaru astronomer Ryuji Suzuki is ready to go to the next step. Noting the installation of the HiCIAO camera (High Contrast Instrument for the Subaru Next Generation Adaptive Optics), Dr. Suzuki points out that “…the unique instrument was primarily designed for the direct detection of extrasolar planets and disks.” Indeed, the Subaru team is hopeful that they will be the first to directly observe a planet orbiting a star other than our own (we’ll discuss the possible detection of visible light from a planetary atmosphere by another team on Monday).

Image: Not much like the Hawaii most of us imagine, this is the summit of Mauna Kea. Will instruments here and in other locations be able to snare direct images of exoplanets with upgrades to their technologies? Credit: National Astronomical Observatory of Japan.

HiCIAO replaces an older imager that also uses coronagraphic techniques to filter out direct light from a star to make faint objects near it more viewable. But the new system offers contrast 10 to 100 times better than than the old. Its other trump card: A significantly upgraded adaptive optics system that increases the clarity of what Subaru sees by a factor of ten. The latter uses a deformable mirror to effectively remove atmospheric distortion and a new laser guide star system, so that the instrument is not limited in terms of where it can look.

If nothing else, the new instrument should provide impressive results in the study of brown dwarfs, as well as dust disks around nearby stars. But a direct image of a planet — not a brown dwarf — would be a historic first. ‘First light’ use of the new instrument, which occured on December 3, is a reminder of how much ground-based astronomy has improved in the unceasing quest for better seeing conditions, to the point where objects once thought visible only from space are now within its legitimate domain.