A New Earth Crosser and an Old Impact

With the news that an asteroid called 2007 TU24 will pass 538,000 kilometers from Earth on January 29, attention turns to the Catalina Sky Survey, which discovered this near-Earth object last October. The asteroid is thought to be between 150 and 600 meters in diameter, and should become visible to amateur astronomers in late January. The sky map below shows its track near Earth close approach as seen from Philadelphia, but you can generate personalized ephemeris tables here.

The Near Earth Object Program is quick to point out that 2007 TU24 poses no threat to Earth during the upcoming encounter, and also notes that objects of this size are thought to pass this close to our planet every five years or so. With an estimated 7000 discovered and undiscovered asteroids in near-Earth orbits, let’s keep the Catalina Sky Survey and other programs well funded. The next known close approach by an asteroid of this size will be in 2027, all of which should remind us of the need to get an asteroid surveying mission on our launch calendar soon. 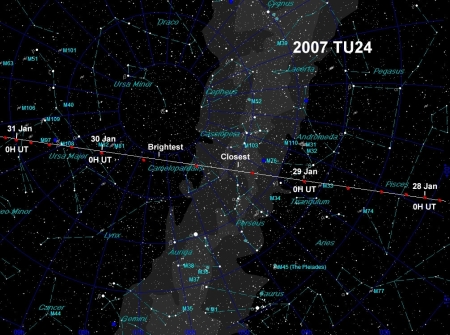 Image (click to enlarge): The track of 2007 TU24 near the time of close approach to Earth, as seen from Philadelphia. Credit: Dr. Dale Ireland/Near Earth Object Program.

Meanwhile, speaking of a hit rather than a miss, the Chicxulub crater in the Yucatan has been the subject of three-dimensional seismic studies as part of an attempt to assess its role in the KT extinction event that caused the demise of the dinosaurs, along with so many other species. Work at the University of Texas at Austin reveals that the asteroid landed in deeper water than previously thought, releasing some 6.5 times more water vapor into the atmosphere.

The result? A need to reconsider how materials at the impact site would have been spread. UT research scientist Sean Gulick notes that “The greater amount of water vapor and consequent potential increase in sulfate aerosols needs to be taken into account for models of extinction mechanisms” (see this news release for more). Gulick refers to sulphur-rich sediments at the site, whose reaction with water vapor would produce the said aerosols. These aerosols could create a cooling effect in the upper atmosphere and also generate acid rain, effects now believed to be more intense than had once been believed.

Watch the study of impact events take a new direction as we examine the trajectory of the incoming impactor. The UT work began as an attempt to find the signature of a trajectory, and while that goal was not achieved (“We discovered that the shallow structure of the crater was determined much more by what the impact site was like before impact than by the trajectory of the impactor,” says Gulick), future attempts to determine such trajectories could prove quite useful. Most ejected materials would be flung out of the crater downrange from the impact, flagging those areas most immediately affected by the event.

The paper is Gulick et al., “Importance of pre-impact crustal structure for the asymmetry of the Chicxulub impact crater,” published online at Nature Geoscience 13 January 2008 (abstract).