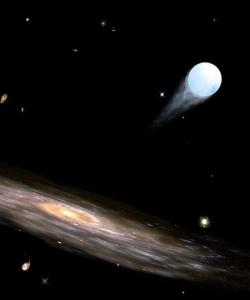 Stars being kicked out of the Milky Way — so-called ‘hypervelocity stars’ — follow a mechanism that seems understood. We know there is a supermassive black hole at galactic center, and it is likely the cause of the ejection of such stars from our galaxy. Nine stars have been found that fit this description, all of them over 50,000 parsecs from Earth. But the tenth is an anomaly, a young star ejected not from the Milky Way but from the Large Magellanic Cloud. A black hole is assumed to be the cause here as well, although the culprit has yet to be identified.

One thing that assists researchers in identifying stellar origins is the fact that stars in the Large Magellanic Cloud (LMC) have their own particular characteristics. Alceste Bonanos (Carnegie Institution) was on the team that noted differences between this star — HE 0437-5439 — and the other galactic refugees. It couldn’t, for example, have come from the center of the Milky Way because getting it to its present location would have taken 100 million years, and the star is only 35 million years old. And then there is the matter of stellar elements. Says Bonanos:

“We were intrigued by the conundrum and decided to take up the challenge to solve this. Stars in the LMC are known to have lower elemental abundances than most stars in our galaxy, so we could determine if its chemistry was more like that galaxy’s or our own.”

The Carnegie team was able to verify the star’s age, and the fact that HE 0437-5439 is nine times the mass of the Sun. Its velocity was pegged at a scorching 722 kilometers per second. That’s fast indeed (ordinary stars in the Milky Way average out at around 100 km/s), but consistent with the velocities of other hypervelocity stars. And as for the relative abundance of various elements, the star shows a concentration about half that of the Sun, consistent with an origin in the LMC.

The ‘launch’ mechanism? Assume that the star was originally part of a binary system and you can set up a close pass by a massive black hole, with one star captured by the exotic object, the other flung out of the galaxy. This scenario was first proposed by Jack Hills (Los Alamos National Laboratory) in 1988, in a paper proposing that hypervelocity stars might exist and provide evidence of the black hole at galactic center. The first observational evidence for such stars came in 2005, and the assumption is that many more such stars are waiting to be found.

What we have here is the first observational evidence of a black hole in the Large Magellanic Cloud, surely a priority target for future Magellanic watchers. This is also the first time the abundance of key elements has been measured in a hypervelocity star. Thus does a rare find (only ten known hypervelocity stars) become rarer yet, and we measure the motions of a star whose origins lie in a satellite galaxy to our own.

The paper is Bonanos et al., “Low Metallicity Indicates that the Hypervelocity Star HE 0437-5439 was Ejected from the LMC,” scheduled to run in the Astrophysical Journal Letters and available online. And for you completists out there, Jack Hills’ paper is “Hyper-velocity and tidal stars from binaries disrupted by a massive Galactic black hole,” Nature 331 (25 February 1988), pp. 687-689 (abstract).