Putting the Pieces Together in Space

Tau Zero journalist Larry Klaes takes a look at Mason Peck’s work with reconfigurable space structures. Anyone who ponders the future of large structures in the Solar System — and this might include space-based telescopes, O’Neill habitats or perhaps one day enormous lenses of the sort Robert Forward envisioned — will wonder how such creations can be assembled. Potential solutions may one day grow out of Peck’s work, until recently funded by NIAC. Centauri Dreams also wonders how such theories will be supplemented by nanotechnological techniques that may one day return us to the era of thinking big in environments far from home.

Space is a promising but often difficult environment to work in. A typical spacecraft has to deal with a near vacuum, extreme temperatures, radiation fields, and micrometeoroids. With space ‘starting’ at one hundred miles above Earth’s surface, a region attainable at present only with expensive rockets, sending up numerous vehicles that have to work autonomously many times over while carrying their own resources merely adds to the daunting task of utilizing the Final Frontier.

One potential solution to some of these issues is being explored by Dr. Mason Peck, an assistant professor of mechanical and aerospace engineering at Cornell and director of the Space Systems Design Studio. Peck and his university team have been experimenting with the amazing properties of superconductivity, which involves the ability of an object to conduct electricity indefinitely with no resistance under certain conditions.

Peck is investigating an unusual property of type II superconductors called magnetic flux pinning, which may provide an ideal technology for in-orbit self-assembly of modular spacecraft and satellite formations. He calls these ‘non-contacting modular reconfigurable spacecraft.’

“A magnet on one spacecraft module interacts with a superconductor on another module. One becomes pinned to the other, but across some distance of empty space,” explains Peck. “At the moment that distance is on the order of centimeters. We would like to extend it by a factor of 10 or 100. We have some ideas about how to do that [in ways] more interesting than simply using bigger magnets and bigger superconductors.”

As for transferring data and power from one spacecraft module to another in space, Peck envisions infrared lasers being the key to making this process a reality. He and his team were able to demonstrate this principle in the laboratory in 2005 with infrared LEDs and specially designed photovoltaic cells. 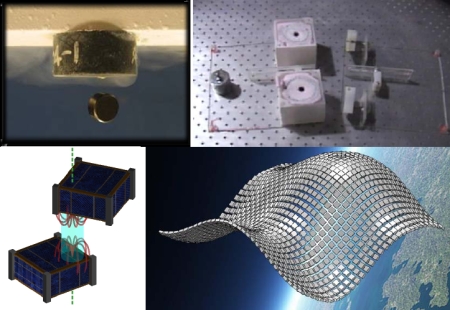 Image: A composite of various lab demonstrations, computer models, and artwork related to modular spacecraft and the methods used in creating them. Credit: Mason Peck.

Among the applications Peck sees for this technology are spacecraft docking, sparse-aperture telescopes with individual mirror segments flux-pinned together, and the assembly or reconfiguration of space structures without mechanical hardware.

“In this project we are investigating spacecraft modules that would be constructed with interfaces consisting of combinations of magnets and superconductors, establishing a non-contacting interaction between the modules,” says Peck. “This action-at-a-distance interaction overcomes the limitations of other spacecraft-positioning strategies that involve electromagnetic fields. It allows fractionated or modular spacecraft to fix their relative positions and orientations without any mechanical connection, active control, or power expenditure. Power is in short supply in space, and robustness to power failures is an important objective of any spacecraft; so this technique is perfect for space applications.”

Last summer Peck and his team completed two experiments investigating their concept of operating multiple craft together in space.

“Our results indicate that flux pinning is promising for modular spacecraft assembly and station-keeping applications, providing mechanical stiffnesses over 200 Newtons per meter (N/m) at small (5 millimeter) magnet-superconductor separations and potentially useful non-zero stiffnesses at larger (over 3 centimeter) separations, with significant damping,” Peck adds. “We find that increasing the magnetic flux density at the superconductor surface strengthens the flux pinning forces, suggesting the possibility that higher stiffness can be obtained over larger distances by increasing or focusing the magnetostatic field.”

The basic idea of modularizing spacecraft is not new, going back to the first decades of the Space Age with the Apollo Command/Service Module docking with the Lunar Module. Later years would see manned craft from both the United States and Soviet Union docking with the first space stations in Earth orbit. Certain collections of space satellites have been conducting formation flights since the 1980s.

Peck’s project was funded by NASA’s Institute for Advanced Concepts (NIAC) until last year, when the space agency shut down the institution. Since then Northrop Grumman Space Technologies (NGST) has sponsored some of the work in the form of a gift to Cornell University. Peck also hopes to receive funding from DARPA, the Defense Advanced Research Projects Agency, in the near future.

“We anticipate that this technology will be very relevant to DARPA’s System F6 program, also known as the ‘Future Fast, Flexible, Fractionated, Free-Flying Spacecraft united by Information exchange.'” The primary goal of the System F6 program is to replace a more traditional ‘monolithic’ satellite with a cluster of modular satellites that can act as well as, if not better, than a single vehicle.

“CubeSat launches are relatively inexpensive: $50,000 to launch, probably $15,000 for the hardware we have in mind. So, we don’t need much,” says Peck. “We had also hoped to try a demo on NASA’s zero-gravity aircraft, but some other projects have taken more time and we find ourselves without enough resources (people and funds) at the moment. There is some possibility that DARPA’s F6 flight demo will include something along these lines.”

Among the innovative ideas Peck hopes become reality one day are space telescopes comprised of many discrete mirrors large enough to resolve planets circling distant stars. The Cornell professor also sees such modules as safe places for astronauts to store their equipment when working outside their vessels in the space environment.

“No longer are we required to distinguish among spacecraft subsystems, individual spacecraft, and constellations of spacecraft. Instead, the proposed concept blurs the distinction between modular spacecraft and formation flying, between spacecraft bus and payload, and to some extent between empty space and solid matter. Articulated payloads, reconfigurable space stations, and adaptable satellite architectures are possible without the mass and power typically associated with maintaining relative position and mechanically rebuilding structures.”