2008 marks the 45th year of operation for the Arecibo Observatory, the largest single radio telescope on Earth. Maintained and operated by Cornell University since its opening in 1963, Arecibo has definitely made its share of contributions to our knowledge of the cosmos.

To cite but a few examples, astronomers beamed powerful radar signals from the one thousand foot wide radio telescope onto the planet Mercury in 1965 to determine its rotation rate and again in 2007 to demonstrate that the world’s core is molten. Arecibo confirmed the existence of neutron stars, the remains of massive suns that had become supernovae, in 1968; in 1990 it found the first known exoplanets around a type of rapidly rotating neutron star called a pulsar. The first deliberate electromagnetic message aimed to any technological alien intelligences in the Milky Way was broadcast from Arecibo in 1974. In 1989, the observatory’s radar returned the first images of a passing planetoid, revealing its shape and dimensions to scientists.

For six months in 2007, workers gave the giant radio telescope’s platform and focal-point structure, which hangs high above the Puerto Rican jungle where Arecibo resides, its first serious paint job in four decades. This project was designed to keep Arecibo operating efficiently for many years to come, even as its near-term future is being threatened by a loss of funding from the National Science Foundation (NSF), which operates the observatory in a cooperative agreement with Cornell University. 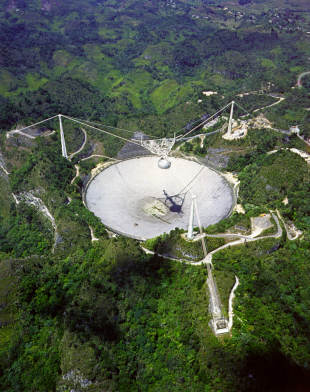 Arecibo’s first assignment after its makeover was to examine the space object known as 3200 Phaethon, named after the son of the Greek Sun god Helios – an appropriate designation, as this relatively small celestial object comes closer to our yellow star than any other known member of the Solar System.

Image: Arecibo’s ongoing work not only teaches us about the cosmos but provides critical planetary defense by identifying Earth-crossing asteroids. Credit: NAIC/Arecibo Observatory, a facility of the NSF.

The first planetoid to be discovered by a spacecraft (the InfraRed Astronomical Satellite, IRAS, in 1983), Phaethon may actually be an extinct comet, as debris from this body is also the source of the Geminids meteor shower, which appears in Earth’s sky every mid-December.

A team of scientists working with and at Arecibo, which include Cornell University assistant professor of astronomy Jean-Luc Margot, bounced radar beams off Phaethon last December. The team wants to know more about how solar energy affects planetoids that travel near the Sun, which can have their orbits and rotation rates gradually changed over time through long exposure to sunlight. What the scientists learn from these observations will help in our understanding of the many small space bodies that continually cross Earth’s orbit, some of which may one day be on a collision course with our planet and threaten all life upon it.

Arecibo’s impressive capabilities were also in evidence at the American Astronomical Society’s (AAS) 211st meeting in Austin, Texas, last month, when astronomers announced the discovery of methanimine and hydrogen cyanide, two types of molecules which form the amino acid glycine when combined with water. Amino acids are the building blocks of proteins, which are large organic compounds that perform many important functions in the cells of every living being on Earth.

These molecules were found in a galaxy named Arp 220 located some 250 million light years from our Milky Way galaxy. The starlight emitted from Arp 220 currently being witnessed by astronomers on Earth took 250 million years traveling at the speed of light (186,000 miles per second) to reach our planet across intergalactic space. When that light left the far-off island of stars all those ages ago, dinosaurs had yet to appear on Earth.

“The fact that we can observe these substances at such a vast distance means that there are huge amounts of them in Arp 220,” said Emmanuel Momjian, one of the Arecibo astronomers who made the find. “It is indeed very intriguing to find that the ingredients of life appear in large quantities where new stars and planets are born.”

The Arecibo astronomers utilized the telescope’s main spectrometer to make the discovery of these molecules (a spectrometer is a device that measures light properties at specific frequencies of the electromagnetic spectrum). Team member Tapasi Ghosh noted that they were not searching for any particular molecule in that active galaxy, so their finding was “incredibly exciting.”

Another astronomical find involving Arecibo announced at the same AAS meeting in Texas regards a new determination about neutron stars and black holes, two types of aging massive suns that collapse and crush themselves into incredible densities. Arecibo Observatory astronomer Paulo Freire and his team studied the binary pulsar M5 B in the globular star cluster Messier 5, located in the constellation of Serpens the Snake, where the galaxy Arp 220 also resides. Using the facility’s spectrometer from 2001 to 2007 to measure the rotating beams of powerful radiation emitted from the neutron star’s poles, Freire was able to determine the mass of this dense stellar remnant accurately.

Freire discovered that this particular neutron star remained in its current state at 1.9 times the mass of our Sun. Astronomers previously thought neutron stars would collapse into black holes at less massive states.

“[This find] means that to form a black hole, more mass is needed than previously thought,” Freire told the Cornell Chronicle. “Thus, in our Universe, black holes might be more rare and neutron stars slightly more abundant.”

The above stories represent just some of the dozens of astronomical projects currently being conducted at the observatory. No doubt even more amazing things will be learned about our cosmos in coming years, thanks to that giant dish sitting on a distant island in the Caribbean Sea.