Jumper: Remembering ‘One Step from Earth’

When Hollywood met MIT last month in Cambridge, MA I suspect most of the students who jammed the on-campus lecture hall to discuss the new movie Jumper were thinking about Star Trek‘s famed transporters. After all, Jumper is a movie about a man who learns at a completely unexpected moment that he can teleport himself anywhere he wants to go. The Enterprise’s transporters could get you to your destination in a hurry, too, and presumably invoked some of the same mechanisms, the gist of which were explained in the discussion by MIT physicists Max Tegmark and Edward Farhi, with Hollywood contribution by director Doug Liman and Hayden Christensen, respectively director and star of the film. 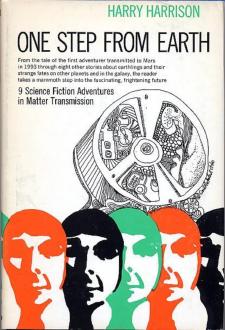 What came to mind first for me, though, wasn’t Star Trek but the Harry Harrison collection One Step from Earth (Macmillan, 1970). Harrison’s stories wove together a future around the premise that beaming matter to destinations near and far would soon be invented. His book begins with the first interplanetary transmission (an adventurer sent to to Mars in 1993) and proceeds to encounters with alien life and interstellar war. Want to get somewhere quickly? It was easy in Harrison’s world, as he says in his introduction:

A matter transmitter is very easy to use. Justs dial your number, there, as simple as a telephone, and wait until the ready light comes on. Then step forward, you won’t feel a thing. Just walk through the MT screen as though it were a door…

The entertaining outtakes from Jumper that I’ve seen operate a bit differently than Harrison’s matter transmitters, though. For one thing, there is no screen to step through. We see Hayden Christensen and cohorts simply pop out of existence, then re-emerge, perhaps a few feet away (to dodge a blow) or at the top of the Sphinx, to take in the view. In the trailer, Christensen’s character talks about ‘my day so far’: coffee in Paris, a doze on Kilimanjaro, surfing the Maldives, a stop in Rio, and back for the NBA finals. A marvelous capability if you can find it, but actions have consequences and more than a few things soon begin to go wrong.

We know that quantum teleportation not only exists but has been demonstrated in laboratory conditions, with successful teleportation of a photon over a distance of several miles. Yet quantum teleportation carries its own price. To carry it out, you have to begin with two entangled particles, making a measurement that destroys the quantum state of one, but reconstructs that state (after transmitting information about the measurement) in the other. It would be as if, mused MIT’s Farhi, you destroyed Hayden Christensen and transmitted his egregiously complex quantum state information to a bag of elementary particles located somewhere else. Out would emerge the distinguished actor in a new place, but of course the original would have been lost along the way. 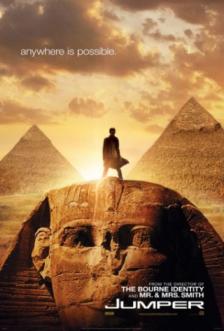 The movie, then, isn’t making any assumptions about quantum teleportation, but in the intriguing MIT discussion, it became clear that if you wanted to go way out on a theoretical limb, it might be possible to invoke wormholes to explain the jumps it depicts. Until recently, the belief was that wormholes might exist according to the laws of physics but could not remain stable without the help of negative energy, and were thus impossible to harness for such functions. On the other hand, we’re now talking about dark energy, a mysterious contributor to the universe’s continuing expansion, and conceivably the stuff by which a wormhole’s mouth could be fixed in place.

Just how you would manipulate that wormhole to go wherever you chose is quite a question, but I like the chutzpah shown by director Doug Liman, who didn’t let this get in the way of telling a good yarn. He wanted, he told the MIT crowd, to know what it would look like if this kind of teleportation happened in front of their eyes, and the effects he uses to suggest the result are ingenious, including a teleportation from underwater into a library complete with onrush of water and associated debris. And since we have no ability to harness dark energy or, indeed, any knowledge of how it operates, having Hayden Christensen possessed by a miraculous power seems as good a plot device as any; no one would argue that the movie is depicting a known phenomenon.

If it were possible, and if it could be done at interstellar distances, imagine the consequences of teleportation. Harry Harrison must have been working with wormholes himself, because he puts no speed of light limitation on his matter transmitters, of the sort required by quantum teleportation. Here’s a snip from the eponymous title story “One Step From Earth,” as our hero on Mars watches his colleague come through the other side:

Otto’s hand appeared even before the voice ended. It took the radio waves nearly four minutes to reach Mars, but the matter transmission was almost instantaneous, since it went through Bhattacharya space where time, as it is normally constituted, does not exist. Otto’s arm dropped limply and Ben took him by the shoulders, a dead weight that he eased to the ground. Rolling him over Ben saw that his eyes were closed. But he seemed to be breathing regularly. He was probably unconscious. Transmission shock, they called it…

Transmission shock indeed, and who wouldn’t experience it when stepping from one planet directly onto another? Let me recommend One Step from Earth, still a fun read after all these years. As for Jumper, I haven’t seen it, but I’ve seen enough scenes from it thanks to Twentieth Century Fox’s press materials that I plan to take it in. Whatever kind of plot you superimpose onto this mind boggling idea (and the plot looks more than a little contrived), the notion of teleportation itself carries its own magic, and while we are a long way from making this kind of jump possible, I am not the one to say that down the road we won’t discover things just as exotic. Working out all the implications is not a task for the faint of heart, but Harry Harrison might still be able to pull it off.