We usually think of gravitational lenses in terms of massive objects. When light from a distant galaxy is magnified by a galactic cluster between us and that galaxy, we get all kinds of interesting magnifications and distortions useful for astronomical purposes. But gravitational lensing isn’t just about galaxies. It happens around stars as well, as we saw recently with the discovery of a solar system with planets analogous to Jupiter and Saturn in our own system. That find was made with the help of a single star crossing in front of another, the resulting magnification allowing the signature of two planets around the closer star to be seen.

Interestingly enough, some of the earliest work on solar sails in interstellar environments came out of the attraction of taking advantage of the Sun’s own gravitational lens. Push some 550 AU out and you reach the point where solar gravity focuses the light of objects on the other side of the Sun as seen from a spacecraft. Note two things: At 550 AU, electromagnetic radiation from the occulted object is boosted by a factor of roughly 108. Secondly, gravity-focused radiation does not behave like light in a conventional optical lens in one important sense. The light does not diverge after the focus as the spacecraft continues to move away from the Sun. Indeed, the focal line extends to infinity.

The Italian aerospace company Alenia Spazio (based in Turin) began investigations into inflatable sail technologies as long ago as the 1980s. Since then, physicist Claudio Maccone has continued to investigate a mission he calls FOCAL, a probe to the gravity focus. Maccone sees such a mission as inevitable, for it takes advantage of an asset every technological civilization will ultimately want to exploit. Here’s how he puts it in his 2002 book The Sun as a Gravitational Lens: Proposed Space Missions:

As each civilization becomes more knowledgeable they will recognize, as we now have recognized, that each civilization has been given a single great gift: a lens of such power that no reasonable technology could ever duplicate or surpass… This lens is the civilization’s star; in our case, our Sun. The gravity of each star acts to bend space, and thus the paths of any wave or particle, in the end creating an image just as familiar lenses do….Every civilization will discover this eventually, and surely will make the exploitation of such a lens a very high priority enterprise.

Maccone is the FOCAL mission’s most eloquent spokesman; his continuing travels and presentations on its behalf are part of the discovery process for our own civilization as we begin to see the possibilities opening up in nearby interstellar space. Another part of the discovery process is the distribution of news like the recent Hubble Space Telescope findings, which have demonstrated 67 new gravitationally lensed galaxies. Clearly, we are only beginning to understand the power of lensing to help us make sense out of even the most distant parts of the cosmos.

Hubble’s latest finds are part of a survey of a single 1.6 square degree field of sky with various space-based and Earth-based observatories. A team of European astronomers using Hubble’s Advanced Camera for Surveys (ACS) identified the new lenses, which were found around massive elliptical or lenticular galaxies without spiral arms or discs.

Here again we run into the issue of scale. Many of the gravitational lensing observations made thus far have involved not just single galaxies but whole clusters. Jean-Paul Kneib (Laboratoire d’Astrophysique de Marseille) notes the difference:

“We typically see the gravitational lens create a series of bright arcs or spots around a galaxy cluster. What we are observing here is a similar effect but on much smaller scale – happening only around a single but very massive galaxy.” 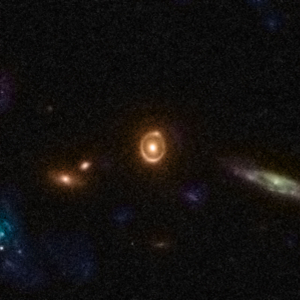 Four of the discovered lenses have produced ‘Einstein rings,’ which occur when a complete circular image of a background galaxy is formed around a foreground galaxy. Finding such lenses isn’t easy, and involves going through a catalog of more than two million galaxies by eye to identify possible candidates. Given the odd shapes that lensed galaxies can assume, filtering out a genuine lensing event from the observation of an unusually shaped galaxy takes time. But the European team now plans to train robot software on the lenses thus far found, hoping to identify still more.

The universe, it would seem, continually tries to tell us about itself through lensing inherent in the effect of mass upon spacetime. We’re a long way from such an infrastructure, but imagine the consequences for astronomy of having a wide variety of observational tools moving on spacecraft within the Sun’s gravity focus to examine targets ranging from the earliest galaxies to nearby stars and their planets. Such an outcome would depend, of course, upon our mastering propulsion technologies that can reach such distances within a single human lifetime. But it’s clear that the benefits of going interstellar won’t be found just around other stars. There’s plenty of work to do within 1000 AU of home.